These days, I read in four different ways: Online, in physical print, on my (old model and frankly in need of replacement) Kindle, or by having my Echo Dot read to me at night in bed. 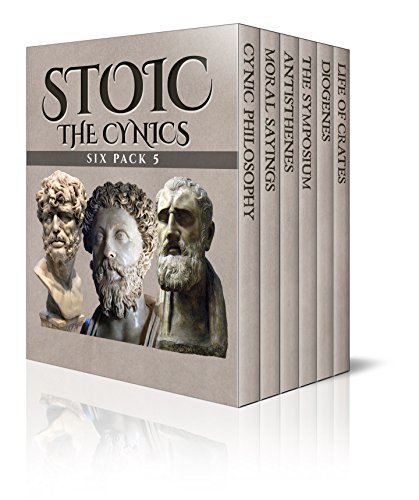 I've "read" the two volumes of the Stoic Six Pack series I own in mostly that last manner.

Those two volumes are (not affiliate links):

Stoic Six Pack 5 – The Cynics: An Introduction to Cynic Philosophy, The Moral Sayings of Publius Syrus, Life of Antisthenes, The Symposium (Book IV), Life of Diogenes and Life of Crates (Illustrated)

I particularly like the latter, and have "read" it several times. Diogones (of Sinope) is my co-pilot.

On one hand, they're very engaging and thought-provoking (although I've accompanied my last two going to sleep sessions with Aristotle's Ethics instead).

On the other hand, the problem with starting a book like this as a way of going to sleep is that I, well, go to sleep, and usually lose my place, and usually have to start over every time. But I have made it through the latter volume at least once by telling Alexa to pause before drifting off and then picking up where I left off next time.

I have to be careful about having Alexa read me to sleep. I recently noticed that I wasn't feeling very rested each morning, and concluded that it was because I was engaged in my latest re-"reading" of Shelby Foot's The Civil War: A Narrative. Both because it keeps me awake and interested for longer than is probably good for me, and because it probably gives me bad dreams.

So I went back to philosophical stuff. Nietzsche is enjoyable for "semi-engaged drifting off" purposes. For hardcore insomnia or when you just want to get unconscious ASAP, I recommend Kant, Wittgenstein, or especially Bertrand Russell's The Problems of Philosophy.

Anyway, if you are at all interested in Greek philosophy generally, or the Stoics or any of their associated schools specifically, you should give these collections (as the title implies, there are six selections in each "six pack" volume) a look. They're inexpensive and worth your time.

As for me, I've placed the other seven six volumes on my Amazon Wish List in case anyone wants to help a brother out. If not, I'll probably continue picking them up over time. It seems like there's always at least one volume on sale for 99 cents (even as I wrote this, I bought the sixth installment at that price).