Wordle is a daily five-letter word-guessing game. You get six guesses to figure out the word.

It is not exactly a cryptogram -- there's no "plaintext" to derive by figuring out a substitution cipher -- but it's nonetheless worth treating as a cryptogram in the sense that the best ways to solve it are by starting with words that include the most frequently used letters, and by treating the letters you reveal (for each guess, it lets you know which of the letters you used are in the word, and whether they're in the right places in the word) as "cribs" that can be clues to which word it might be or can't be (e.g. if it starts with "T," the word obviously isn't "ROSES," but could possible be "TWICE").

Let's go through my current strategy before I start talking about the changes I'm going to be making. Here's yesterday's Wordle (#426), which I'm using because I've been waiting for one that took me all six tries to solve, the better to examine technique. 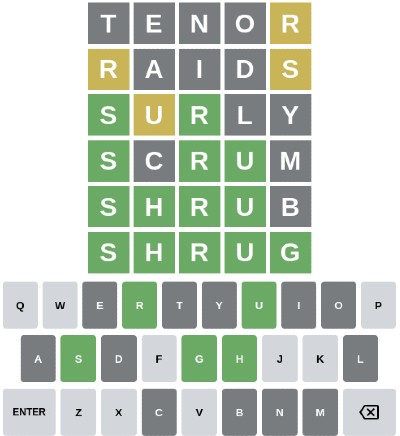 As you can see, my starting guess is "TENOR." That's the word I've been using every day for some time, because it includes frequently used letters (in descending order, E, R, O, T, and N are the first, third, fifth, sixth, and seventh most frequently used letters in the English language).
The logic behind my second guess, "RAIDS," is to get two more vowels into play, since neither "E" nor "O" are in the solution (A and I are the second and fourth most frequently used letters), and to end with an "S" both because S is the eighth most frequent letter and because many solutions could be plurals ending in "S." It also lets me test the only letter I got (but in the wrong position) in the first guess in a different position.
Well, a little joy there. I know the word contains "R" and "S," but neither of them are positionally correct yet. And I've tried four of the English language's six vowels with no luck. Since English words almost all include vowels, I'm going to try the last two in my next guess:

"SURLY." Hey, I have two letters in the correct places, and now know the word includes a "U" but not a "Y." There's really only one likely place for that "U" to go ... and I should have guessed here that the second letter would be an "H," but I tried to be clever and go with a rugby term.
"SCRUM." No "C," no "M." This pushes me to the conclusion that the first four letters must be "SHRU." I've got two choices, and two remaining guesses. I guess wrong ("SHRUB"), then right ("SHRUG"). Whew. Got in just under the wire!
This method, with this starting word, has generally worked well for me. I've had winning streaks of more than 100 Wordles in a row, and I usually get it in three or four guesses, not five or six (occasionally even in two!).
But I think I can do better.
The placement of the "E" in "TENOR" bothers me, and my knee-jerk reaction is that it's likely to be the last, rather than second, letter in more words. According to some formulae, I'm correct.
Also according to some formulae (I've been doing quite a bit of web searching on these subjects), one of the most common starting two-letter combinations for English words is "TO."
So, I think a good starting word should beging with "TO" and end with "E."
What to stick in between there?
"Q" is not a commonly used letter, and I've already got two vowels in there, so "TOQUE" won't do. For the double vowel reason, I also dislike "TOILE" and "TOUSE."
"TONNE" and "TORTE" use letters twice and I prefer not to double letters until the logic forces me to.
But I see that "TORSE" is a word. That gives me the "TO" at the beginning, the "E" at the end,  keeps my "R" from "TENOR" and gives me an "S." As a bonus, if "S" and "E" are in the word but not in the right places, reversing them seems likely to turn them green. The word's composed entirely of high-frequency letters, with three of them appearing in their most common positions.
Assuming Wordle will accept "TORSE," I think that's going to be my starting word for tomorrow.
Posted by Thomas L. Knapp at 12:01 AM