I don't know why I always forget to plug my C4SS op-eds here, but I do ... and then I have to catch up. Here are some of my recent pieces:

So here we go again. Another biennial US election season draws to a close and here come the solemn multi-partisan invocations of civic duty: Exercise that franchise. Pull that lever, push that button, mark that box. The future of western civilization depends on you. And if you don't vote, don't complain.

Question: If I don't drive around my neighborhood at 3am blasting Metallica out my car window at 140 decibels, am I boorish or hypocritical to complain about those who do?

"Intellectual Property" is Why we Can't Have Nice Things

So now we don't have Twitpic. Twitpic is dead. Twitter's users, and therefore Twitter, are worse off. All over competing claims of "intellectual property" in a word. Claims which would be risible if they hadn’t destroyed a valuable application.

Twitpic's demise doesn't showcase a bug in the "intellectual property" system. Rather it highlights a feature of that system, a system designed for the sole purpose of using state power to protect established actors from market competition (Twitter's incidental self-inflicted wound, on the other hand, was a bug).


Goest thou forth and read ...

Amazon's existence lowers book prices for readers in multifarious ways, from selection competition to electronic editions to its online marketplace for used copies. Yet Amazon has simultaneously diminished the cost for anyone to publish and sell books and earn money. By offering an alternative to the genuine near-monopoly of capital-intensive big publishers, Amazon distributes those lower prices and that new revenue more evenly among readers and authors.

Hachette and Krugman know they can't turn back the clock that produced Amazon's burgeoning marketplaces, preferring to benefit from them, but are convinced Amazon owes them a walled garden, sparing them price competition with the rabble. They want Amazon to preserve their income inequality at the expense of its customers.

I'm surprised that libertarians haven't been smeared with more "see how much we need government?" propaganda than usual over this. But thinking about it, I can see why. It's not like the governmental response inspires much confidence, and there are obvious ways in which even the current not-very-free market could respond far more effectively. Two potential panic points revealed over the last couple of weeks provide great examples ...


Careful. It's contagious.
Posted by Thomas L. Knapp at 10:01 AM No comments:

AMA Answers and a Poll

Maybe I'm a narcissist, but I like to think that some people value my opinions or at least find them entertaining.

I've never done an AMA ("Ask Me Anything") before, but right before an election I've pretty extensively handicapped seems like a good time for the first one. Here are the rules:

2) Ask in the comments to this post. I haven't decided on a format for the answers -- I may answer in the comments, or in a stand-alone post, or in some other way. But the Disqus comment form right below this post is the asking venue.

3) Rough deadline: Midnight eastern time tonight. If I don't have any questions by then I'll assume none of you care what I think. Which is fine.

Could Bitcoin (or some future cryptocurrency) become the basis for the biblical "Mark of the Beast?" Don't ask me why that occurred to me. It just did. And of course I'm not the first one to think of it by any stretch -- a Google search on the string bitcoin biometric tattoo "mark of the beast" returns 129,000 results.

Of course, it's quite likely that you either don't believe in the Bible or that you interpret in any of various ways which don't place a great deal of importance on that particular matter. But let's have a look at Ye Aulde Revelation anyway. From the King James Version ('cause that's how I roll scripture-wise), chapter 13, verses 16-17:

16 And he causeth all, both small and great, rich and poor, free and bond, to receive a mark in their right hand, or in their foreheads:

17 And that no man might buy or sell, save he that had the mark, or the name of the beast, or the number of his name.


The technology is definitely there. Think about it:

You have a cryptocurrency account. The identifier for that account is tattooed (perhaps as a QR code?) or microchipped on your right hand or forehead.

To give you money, all anyone has to do is scan the code and transfer money from their account to yours.

For you to spend money, you wave the QR code over a scanner and then enter a passphrase or use biometric identification or whatever to authorize a transfer out of the account and into another. Badabing, badaboom.

No reason this couldn't be done right now. Of course, the third element Mark-of-the-Beast-wise is that it's compulsory. Which, as we know, could never happen, because countries don't have legal tender laws or anything like that, right?

And no, I'm not trying to slam Bitcoin specifically or cryptocurrencies in general. I love'em (tip jar in the right sidebar, ladies and gents). But I still think it's interesting how something written circa 2,000 years ago features a hook on which the concept hangs so prettily.
Posted by Thomas L. Knapp at 10:46 AM No comments:

Gridlock ain't what it used to be ...

For those who think next week's congressional elections are incredibly consequential and that we'll see dramatic changes if the Republicans get to 51 seats in the Senate, consider this:
Since taking control of the House in the 2010 elections, the Republicans have had it in their power to stop any Democratic proposal or measure in its tracks.

Therefore, to the extent that the existing political, economic, etc. situations depend on the actions of the federal government, the Republicans own those situations just as much as the Democrats do.

All things considered, I do prefer "gridlock" -- if one party controls the White House, I want the other party to control at least one house of Congress but fall short of controlling veto-proof majorities in both houses.

But frankly, gridlock ain't what it used to be. The two parties get along far too well in my opinion. And both parties tend to roll over far too easily for the president, especially so far this century. I'm pushing 50 and I'm having trouble remembering an election as obviously and completely inconsequential as this one.
Posted by Thomas L. Knapp at 6:47 AM No comments:

Even if he doesn't throw in for the top slot, Jerry Brown will be on the Democratic Party's short list for a cabinet position, quite possibly veep.

Lots of people like to joke about "Governor Moonbeam" and his previous presidential campaigns, and yes, he will be pushing 80 years old as of inauguration day, but let's have a look at the ol' resume:

Thought I'd get that one in early, before everyone's saying it.
Posted by Thomas L. Knapp at 10:50 PM No comments:

How to Lose a Tight Election

Rick Scott wasn't doing nearly as well as you'd expect an incumbent to be doing against a flaky party-hopping opportunist like Charlie Crist anyway (see RCP), and now this. Apparently his scheduler got mixed up and told him he was guest-starring on America's Dumbest Douchebag Videos or something.

Viv Forbes at the Heartland Institute:

Post-Election Update: I'm leaving the original text of this post intact -- not deleting or altering any existing text. What I am going to do is ADD text to illuminate where I was right or wrong. Where I was wrong, I will add the note "WRONG! BOOM!" -- the "boom" being an homage to Eric Dondero of "Libertarian" Republican. Where I was right, I'll just add the note "RIGHT." And of course, I'll add a large admission of error to the top here, like this:

I WAS WRONG. BIG-TIME. NEARLY COMPLETELY. ON BOTH SENATE AND GUBERNATORIAL OUTCOMES.

Original post with the additions noted above, below the dashed line:

The 2014 US congressional elections are now one month  and a day away (the map says 30, but I decided to get this thing written and posted a day early).

Why am I making my final predictions on the coming US Senate races so far in advance? Simple: It doesn't take much analytical skill to look at the polls the weekend before the election and "predict" that the races will turn out the way the polls say they will. So I'm doing it 31 days out and then standing by my predictions. If I'm right I'm right, if I'm wrong I'm wrong. The latter does happen now and again and the convention wisdom says that it will happen this time, because: 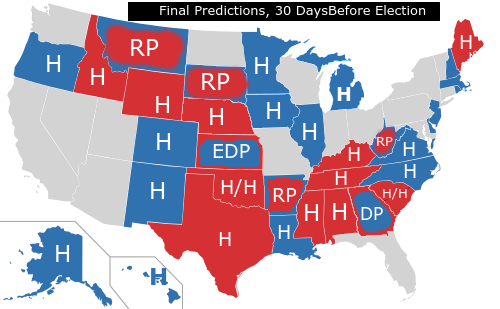 The current composition of the US Senate is 53 Democrats, two "independents" (Angus King of Maine and Bernie Sanders of Vermont) who caucus with the Democrats and 45 Republicans.

In order to seize a Senate majority, the Republicans need a net pickup of six seats.

I predict that the Republicans will achieve a net pickup of two seats. WRONG! BOOM!

In Arkansas, Republican challenger Tom Cotton will probably unseat Democratic incumbent Mark Pryor. This is the Republican pickup prediction that I'm least confident in, but it's not especially controversial either. RIGHT

But in Georgia, Democrat Michelle Nunn will beat Republican David Perdue for that state's open, previously Republican, seat. That's a mildly controversial (as compared to the conventional wisdom) prediction. The election will almost certainly require a run-off when neither "major party" candidate breaks 50%. WRONG! BOOM!

And in Kansas "independent" Greg Orman will unseat Republican incumbent Pat Roberts. Orman says  he will caucus with the majority party, which in my prediction set will be the Democrats, making this an effective Democratic pickup. This is the Democratic pickup prediction I'm least confident in because independent candidates do have a tendency to crash and burn even when they look good early. WRONG! BOOM!

So only two net pickups for the Republicans. That's four short of what they need. WRONG! BOOM!

Other competitive races in which I don't expect seats to change parties:

Of course if I'm wrong about any four of the Democrat holds or pickups I predict, the Republicans get their majority. They could even do it with any two if they can get Democrat Joe Manchin of West Virginia to switch parties and "independent" Angus King of Maine to switch caucuses. So I wouldn't completely discount the possibility of a Republican majority Senate next term.

So anyway, the above is my story and I'm sticking to it until November 5th proves it right or wrong.
Posted by Thomas L. Knapp at 2:49 PM No comments:

Security Theater Exhaustion is Setting in

In point of fact, Barack Obama's personal security is at least as good as the personal security provided for any other banana republic figurehead. Probably better, insofar as the loyalty of the military to the regime isn't quite so doubtful. Yet.

This stuff is about as entertaining -- and about as believable -- as, say, professional wrestling.
Posted by Thomas L. Knapp at 10:59 AM No comments: