Yet Another Commercial Endeavor I Lack the Wherewithal to Even Try

This morning, I was thinking about watermelon.
Why? Well, a scene from the movie Glory kept turning over in my head. I wasn't able to easily find a clip, but it's something like this: Colonel Robert Gould Shaw (played by Matthew Broderick) is, on horse, going through a sort of little obstacle course in which he weaves between posts with watermelons atop them, slashing at the melons with his saber.
And something about it kept bugging me. This was in Massachusetts circa 1863. Did they have watermelon in Massachusetts in 1863?
The fruit has always mostly struck me as a southern kind of thing. When I was a kid in southern Missouri, my brother worked for a guy who, at a certain point in the summer, would lead a convoy of pickup trucks down to southern Arkansas on a Thursday afternoon, fill them with melons, drive back, and park the trucks around the county to sell the melons roadside all weekend.
I went looking, and according to Wikipedia, watermelon "was being grown in Massachusetts by 1629." So the presence of watermelon in the movie is not an anachronism (whether the little training exercise involved was a thing, I still don't know).
But that didn't stop me from thinking about watermelon. What my mind turned to next was the ingenious (but so far as I can tell, not especially popular, at least in the US) Japanese idea of growing watermelons in square boxes to shape them so that they stack more easily and stably and more of them will fit in a shipping container. And, again per Wikipedia, "[p]yramid-shaped watermelons have also been developed and any polyhedral shape may potentially be used."
At which point it occurred to me how fun it would be to grow and sell watermelon in sets of these shapes: 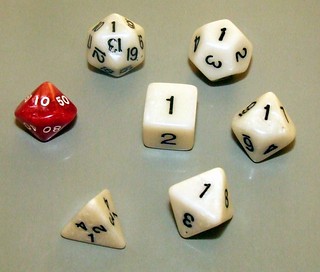 Photo by Vanessa Pike-Russell. Attribution-NonCommercial-NoDerivs 2.0 Generic (CC BY-NC-ND 2.0) license.
But even if there was really a market for that kind of thing, I'd need a bunch of land to grow the melons on and time and money to have them grown on any scale at all, and a mechanism for distribution and sale. None of which I have, or am likely to magically get, or am interested in doing a bunch of work trying to get (I have plenty of other work to do).
So no dice (see what I did there?).
If you're a watermelon farmer (or even a hobbyist or crank) who sees this and decides to try it, I'd love to hear about it. No, not so I can sue you. I hereby specifically renounce any potential "intellectual property" claims on the idea to the extent that any such claims could potentially exist. But if you want to send me a melon shaped like a 20-sided die, I'll take it.
Posted by Thomas L. Knapp at 1:18 PM