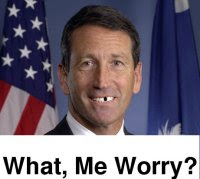 I didn't and don't care where South Carolina governor Mark Sanford was or what who he was doing over that "lost weekend," but he seems pretty insistent on making sure everyone knows the details. How long before we get to the Argentinian lady's diaphragm size?

He's even branching out into additional confessions. I'm not sure if he's trying to unburden a very guilty conscience or just yanking everyone's chain, but either way it's starting to creep me out. Didn't care where you were or what who you were doing, dude. Don't need to know where you stuck that thing.

And then there's this:

Any man or woman who shall be guilty of the crime of adultery or fornication shall be liable to indictment and, on conviction, shall be severally punished by a fine of not less than one hundred dollars nor more than five hundred dollars or imprisonment for not less than six months nor more than one year or by both fine and imprisonment, at the discretion of the court. -- South Carolina Code of Laws, Section 16-15-60

Actionable with respect to Mark Sanford in a legal sense? Probably not, although I guess that depends on whether or not any of his ... adventures ... took place within the borders of South Carolina (if so, he'll probably blurt that out in Technicolor/THX before the week's over).

His own party's had enough (h/t memeorandum), though, and who can blame them? It's one thing for the state's chief executive to discretely dip his wick in legally unsanctioned wax. It's another thing for him to get caught. And it's yet a third thing for him to prance from newspaper office to TV studio to press conference detailing the ways, shapes, manners and and forms of said wick-dipping. [Oh dear God ... he's got a book deal]

Time for Sanford to take his proclivities and attendant obsession with displaying them back to the private sector.
Posted by Thomas L. Knapp at 9:09 AM