Rage, rage against the dying of the light 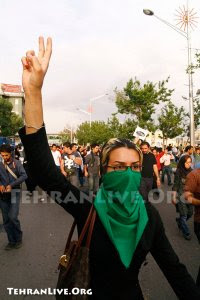 Despite a violent crackdown on their protests and the closing off of legal channels to challenge a disputed election, opponents of President Mahmoud Ahmadinejad went on the offensive today, decrying his government as "illegitimate" and vowing to continue their fight to have the vote annulled.

As the Iranian authorities warned the opposition on Tuesday that they would tolerate no further protests over the disputed June 12 presidential elections, a report emerged of the hangings of six supporters of defeated candidate Mir Hossein Mousavi.

Speaking after Iran's top legislative body upheld the election victory of incumbent Mahmoud Ahmadinejad, sources in Iran told this reporter in a telephone interview that the hangings took place in the holy city of Mashhad on Monday. There was no independent confirmation of the report.

Without corroboration, I have to take Israeli reportage on Iranian politics with a grain of salt, but not too much salt -- Iran's clerical regime has a long history of politically motivated murder, so this wouldn't be exceptional in any way.

It's too late for surrender -- it's been too late for that since the minute the protests began. This thing is ugly, and it's going to stay ugly because ugly is the only language the mullahs understand. Better ugly in the streets, where some good might come of it, than behind closed doors in the regime's torture cellars. The choice is uprising in earnest or surrender without expectation of quarter.

Email ThisBlogThis!Share to TwitterShare to FacebookShare to Pinterest
Labels: Iran