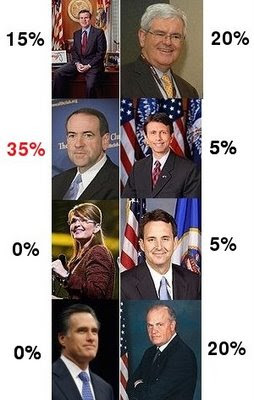 Tucker Carlson interviews Jeb Bush, and Bush displays perfect pitch for a 2012 prospect dipping his toe in the 2009 waters.

In response to the "why not run?" bait:

Frankly I don't wake up each day assuming I'm the solution to life's problems. I think there will be emerging people who have a combination of great ideas, a great ability to communicate those ideas in a relevant way to people, and the ambition necessary to run. You need all three. I am content to be part of the larger effort that creates the fertile ground for those candidates to run.

Circumspect, not coquettish. Door's open a crack, but no wink, wink, nudge play.

This is good stuff, and it's candidate stuff:

- He postures the GOP as having a communication problem, not an ideological problem.

- He never lets the audience forget that he has eight years of experience in the executive saddle as governor of a large state.

- He reminds everyone that he's a Republican who can make bank with the growing Hispanic voter demographic.

- He gets some "regular guy" bumps in there, referring to the necessity of providing for his family's financial security and letting Carlson note that he drove himself to the interview. With his last name, that's something he has to work at -- his personal net worth upon leaving the governorship was reportedly "only" $1.3 million, down from a high of $2 million, but he comes from a monied family (Dad's net worth is in the $25 million range).

- When asked about GOP leaders, he name-checks Gingrich and Jindal, but pointedly ignores the three people most likely to be identified as 2012 contenders at the moment: Huckabee, Palin and Romney.

I wouldn't say he's running, but he's definitely not definitely not running. He's being mindful of what to say and what not to say, keeping his options open and building his cred with modest presentation instead of flash. In other words, good early strategy.

Over on the right you'll see my little "contenders" graphic again, this time with my percentage evaluations of each candidate's chance of securing the 2012 GOP nomination. In subsequent iterations, the numbers will shift as my opinion shifts.

[follow this topic at memeorandum]
Posted by Thomas L. Knapp at 3:05 PM