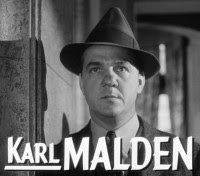 I don't think I've ever seen Karl Malden's face on the cover of the National Enquirer. No disheveled mug shots, DUI "sugartits" outbursts, ran a red light and popped a cop in the schnozz and had to wear an ankle bracelet for a month, etc.

Married to the same woman for 70 years (she survives him). If there were any bimbo eruptions along the way, they don't seem to have made the press.

Guy could act, too. I never really caught The Streets of San Francisco (its heyday was a little before my attentive-to-non-cartoon-TV years), but from what I remember he was solid as Mitch Mitchell in A Streetcar Named Desire and Father Barry in On The Waterfront (I think I'll watch both of them again Real Soon Now).

Give the conspiracy theorists a couple of hours, and we'll learn that he was the real target the whole time -- Ed, Farrah and Michael were his secret security detail while he was working with Billy Mays on a new project of incredible slice and dice proportions. You think I'm kidding? Just wait.
Posted by Thomas L. Knapp at 7:36 PM