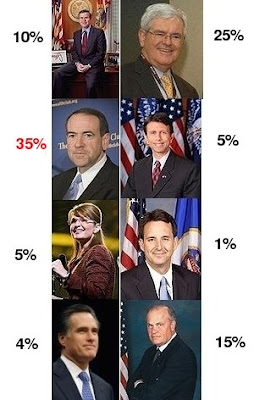 Based in part on some Rasmussen numbers (hat tip -- David Weigel), some significant adjustments to the odds:

- I've taken Minnesota governor Tim Pawlenty down from 5% to 1%. As any number of analysists have pointed out -- I think it was Dick Morris talking about Hillary Clinton who first caught my eye with it -- "unfavorables" are at least as important as "favorables" in evaluating a candidate, and a candidate with unfavorables in the 35% or higher range might as well pack it in. Pawlenty's unfavorables are at 34%, his favorables are only at 38% ... and this is before he's really moved into the fight, and a year after the GOP's national convention was held in his state, giving him a chance to showcase himself. I don't see him going anywhere but down from those numbers, and I expect to take him completely off the board soon.

- Newt Gingrich, on the other hand, gets a 5% boost, up to 25%. I was surprised to see his favorable ratings at 65 ... I'd anticipated more in the 50 range. I also expected his unfavorables to be right up against that 35 "doomed, doomed" number, but he came in six points under at 29. He's aggressively promoting himself, and it's working.

- I was surprised to not see Bobby Jindal or Fred Thompson in the Rasmussen field. As much buzz as Jindal's had, I think it was a mistake to exclude him and I haven't adjusted his number. Apparently I over-estimated Thompson's continuing cachet; I've taken him down to 15%, but still think he may throw in and do well.

- I'm now thinking that I got a little prematurely and impulsively bullish on Jeb Bush. Rasmussen didn't bother to include him, and the other McCain usually serves as a pretty good mood barometer for the GOP's Feral Confederate Chihuahua faction. Downgraded from 15% to 10%.

- As has been pointed out, I was probably unfair to Sarah Palin and Mitt Romney by starting them at zero. I still don't think either of them will be viable candidates for the GOP's nomination come 2012, but the numbers say I'm wrong, at least for now. I've redistributed the left-over percentages to them, 5% and 4% respectively, by way of acknowledging that they seem, at least for the moment, to have a shot.

- The Rasmussen numbers confirm my contention that Mike Huckabee is the guy to beat. He has the highest favorable ratings (78%) and the lowest unfavorable ratings (17%) in the field. He's keeping his mug on TV and his voice on radio, and seldom a day goes by that I don't see email promo stuff from him -- stuff which I assume goes to a VERY large list. He stays at 35%, but with a definite bullet.

A lot can change in three years, but as of right now my guess is that we'll end up seeing a Huckabee/Gingrich faceoff for the GOP's 2012 nomination. Huckabee will play it populist and "outside the Beltway;" Gingrich will trot out the latest version of his highbrow/wonky take on Reaganism.
Posted by Thomas L. Knapp at 6:13 AM