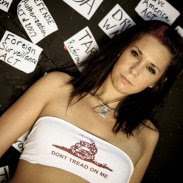 Ladies of Liberty Alliance, that is. "Conspiring to attract libertarian women into the movement One activist at a time."

As for me, I think that "identity politics," rightly done, can be a great starting point. If it's an end in itself then that end is a dead end, but it's just a fact that a bazillion years of evolution have made us into creatures who do tend to viscerally identify at a group level, and we're better off taking advantage of that fact than fighting it.

To put it a different way, it's probably easier for a libertarian to talk libertarianism to a non-libertarian if the two already have something in common -- be it race, gender, sexual orientation, profession or a love of beer or music or model trains or whatever.

Anyway, good luck to LOLA, and let's get with that calendar action already.
Posted by Thomas L. Knapp at 3:36 PM