I have The Garrison Center set up to run through CloudFlare, "a U.S. company that provides a content delivery network and distributed domain name server services, sitting between the visitor and the CloudFlare user's hosting provider, acting as a reverse proxy for websites." Simple version: Cloudflare serves up cached versions of the site's content so that when/if traffic is heavy my web host doesn't get pissy with me over heavy CPU/mysql usage (or just lay down and die).

For some time now, I've been having recurring incidents that obviously come under the broad heading of "attack," or at least "mischief." The last 24 hours are illustrative. Here's a composite screen shot of the two stats that concern me: 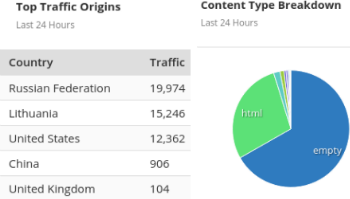 Now, the Garrison Center's content is translated into Russian and Lithuanian on-site (I use a Wordpress plugin called Transposh to create translations into various languages), but since most of the content relates to American politics, I'm skeptical of the notion that 72.5% of the real traffic would come from those two countries.

And it seems like the vast bulk of hits to the site (66.8%) are to URLs/content that don't exist -- that's the "empty" portion in the graph to the right (the little tiny wedges are image types, javascript, etc.; the green portion is HTML, i.e. the actual post/page text).

Obviously something here is not according to Hoyle. Exactly what the point of it is would be interesting, but of greater interest to me is what can I do about it other than, for example, just blocking visitors from certain countries from accessing the site (which I don't really want to do, and which wouldn't stop them if they were determined anyway)?
Posted by Thomas L. Knapp at 8:53 PM

Bluehost is ultimately the best website hosting provider for any hosting plans you need.