Just in Time for Christmas

Believe it or not, someone occasionally suggests that I should flog KN@PPSTER t-shirts.

I used to sell some KN@PPSTER gear, and a little of it even got bought (particularly memorably, a female fan who shall remain nameless bought a couple of KN@PPSTER thongs).

Thing is, I'm not much of an artist or designer. And since I'm not going to spend $38.99 $31.95 on a friggin' t-shirt myself to find out whether or not these actually arrive looking okay, well, caveat emptor. But, if you're wanting a KN@PPSTER tee sooooo bad that you're willing to pony up close to $40 more than $30 and hope for the best, here's what they supposedly look like: 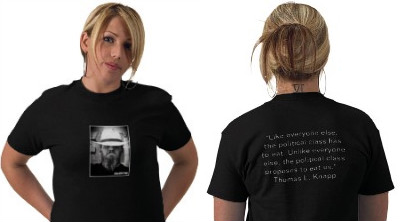 Order here (I repeat -- only if this is really your kind of thing -- I think they're too expensive), and enjoy. I may try to do more stuff later, but I'll probably look at cheaper options to offer.

Addendum regarding "too expensive" -- I get $5 of that $38.99. I figured they were too expensive at $33.99, too, so making a little money myself wouldn't be what dragged them across the "too expensive" line. I'd rather they were, say, $14.99 with $3 going to me. Managed to knock about eight bucks off the price (and took a royalty cut to $3 and change) by switching from CafePress to Zazzle. I also think the shirts will look better. That's the reason for all that strike-thru detritus.