President Barack Obama leaves after delivering a statement on the ongoing congressional tax cut negotiations, at the White House in Washington on December 5, 2011. UPI/Kevin Dietsch.
I was puzzled -- but not puzzled enough to really look into it -- when President Obama threatened to veto the latest "National Defense Authorization Act."

After all, the part of the NDAA that has most people upset is the part allowing the president to disappear anyone he wants, for as long as he wants, without any pesky formalities like, you know, charging that person with a crime or getting him convicted by a jury of his peers or anything.

Why, I wondered, would a president who's already successfully usurped the power to subject Americans (and everyone else) to summary execution by decree, sans said formalities, object to a law formally conferring lesser powers upon him?

Matt Welch and Joshua Swain of Reason clarify things in the text intro to their interview with Laura Pitter of Human Rights Watch:

Or, as a White House statement puts it:

Any bill that challenges or constrains the President's critical authorities to collect intelligence, incapacitate dangerous terrorists, and protect the Nation would prompt the President’s senior advisers to recommend a veto.

So Obama isn't nobly eschewing further expansion of the state's power to abduct, torture and murder. He's just objecting to sharing that power with Congress. Why am I not surprised?


Sen. John McCarin (R-AZ) (R) talks to Sen. Carl Levin (D-MI) prior to a Senate Armed Services Committee hearing on security issues relating to Iraq in Washington on November 15, 2011. UPI/Kevin Dietsch
It's not so much the provisions themselves that bother me. All states degenerate into totalitarianism sooner or later, and when you think about it, America has taken its sweet time (relatively speaking) creeping down the slippery slope and into the sewer with John McCain, Lavrenty Pavlovich Beria, Carl Levin, Reinhard Heydrich, Lindsay Graham, Gheorghe Pintilie and Co. 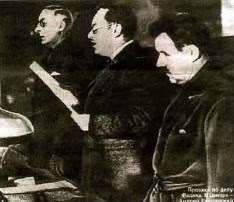 No, what gets my goat is the sheer laziness of the roll-out. Jesus Christ, people, even Stalin took the time and trouble to have Vyshinsky trump up ridiculous charges and put on grandiose show trials at first. What has America come to when the shiftless fuckers in charge can't even be bothered to drum up a modicum of window dressing before going direct into Pol Pot territory?