Tamara is in New York for a work conference. I know she made it safely, because I watched her plane land. Or anyway, I think maybe I did: 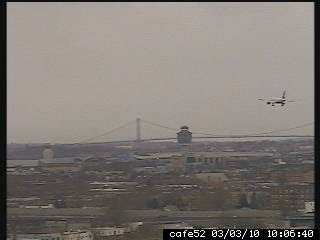 It didn't start out as a stalking thing, really -- at first, I just wanted to see if flights could be tracked. They can, and the kids had great fun watching Mom's altitude, airspeed, lat/long and bearing from St. Louis until about Indianapolis. Then they went back to their stuff and I to mine, but I kept a browser tab open while I did other stuff, and started paying attention again when the plane was supposed to be nearing LaGuardia.

Then it occurred to me ... surely there's a public web cam pointed at the airport, right? Yup!

In theory, this picture could be that flight ... but I'm not sure it is. As you can see, it was taken at about 10:06 Eastern Time. The flight tracker showed the plane three miles out at 10:05 ... but then when the tracking wrapped up, it said that the flight had hit the runway at 9:57 (it was scheduled for 9:58). [Update, 3:45pm: Tamara says that the flight was, in fact, about 10 minutes late landing. If landing statistics match departure statistics (and, um, they should unless someone is warehousing airplanes), a flight lands at LaGuardia about every third minute. So I'd say that this probably was her flight.]

They make it look so much more ... involved ... on 24. This took about two minutes to figure out based on it seeming like an entertaining idea at the time. I didn't have to yell at Chloe to open a socket quick before the bad guys got to Jack (dammit!) or anything. Now I just have to tap into the traffic cameras, pull up the structural details of her hotel, and browbeat POTUS into giving some yahoo immunity in exchange for information on where THE EVIL DEVICE OF THE WEEK is. But first, coffee!
Posted by Thomas L. Knapp at 10:43 AM