I Don't Have a 2020 Presidential Election Prediction Yet ...

But here's where I'm at right now: 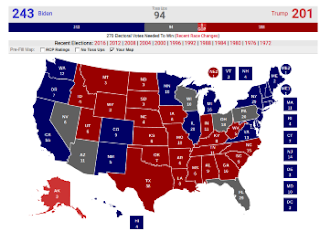 Created using the RealClearPolitics"Create Your Own Election Map" tool.

I'm not doing any "leans [insert party]" here, but I do have six "toss-up" states: Arizona, Florida, Nevada, Ohio, Pennsylvania, and Wisconsin.

Even a year ago, I wouldn't have given Trump better than 5% odds at taking Wisconsin again, or of losing Arizona this time around, or of being really competitive in Nevada. The map has gone way weird in my opinion.

What's the same, and what's changed, in my personal model between 2016 and now?

In 2016, I asserted that in any state where Clinton was polling at 5% or less out front, she was in trouble.

This year, I'm asserting the same thing about Biden ... but I don't think he's in as much trouble, for two reasons.

One reason is that the third party vote isn't going to be as much of a factor this year.  Jo Jorgensen is not as strong a candidate, running as strong a campaign, as Gary Johnson was. Howie Hawkins is, at best, neither a stronger candidate than, nor running a stronger campaign than, Jill Stein.

I'm not saying that because I dislike them, or over ideological considerations. Jorgensen is not a former governor with a huge (by Libertarian Party standards) war chest. Jorgensen and Hawkins both have tough fundraising and on-the-ground campaigning rows to hoe due to the COVID-19 panic. And after the 2016 outcome, the "wasted vote" myth is likely to be more effective at attracting one-time third party voters back to the party they hate least. It is what it is.

Another reason is that I think the polls are at least a little more accurate this time around. Pollsters have had four years to find ways to reach likely voters they couldn't reach (or didn't think were likely voters) in 2016. If there was an "embarrassed to admit I'm voting for Trump" factor in 2016, that factor has diminished in size. He's a four-year incumbent now. Any 2016 supporters who are still with him aren't as afraid to say so as they were then. So on polling, Biden's handicap just isn't as big as Clinton's.

If the election was going to be held tomorrow, and if I had to call it with no "toss-ups," I would probably predict Biden racking up 308 electoral votes to Trump's 230. At the moment, I see Arizona and Ohio as most likely to remain red, Nevada to remain blue, and Florida, Pennsylvania, and Wisconsin to flip from red to blue.

But the election isn't going to be held tomorrow, and I don't have to call it with no "toss-ups" today. This isn't my prediction. It's just a snapshot of what I'm thinking at the moment.