Yeah, I know. Never punch down. But I can't help myself. He's just so fascinating! Also, I got myself sort of implicitly challenged to an SEO duel and it sounds like fun.

I've come across a number of theories about Christopher Cantwell, but they tend to fall within the range bounded at one end by "well, what do you expect, he's an asshole?" to "perhaps he's a government saboteur/provocateur on a secret mission to discredit the libertarian movement." Personally, I think that range is far too limited and that other possibilities should be considered.

One is the possibility that Chris Kyle got tired of the SEALebritarian lifestyle and decided to fake his own death, change his name, lose the family baggage and make an ... interesting ... career move. Same temperament. Same lack of introspection concerning said temperament. Same grandiose, self-promoting style. And think about it. Have you ever seen them together? 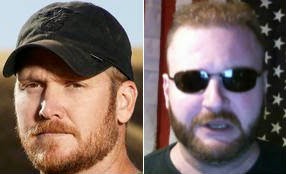 I guess that one could dovetail with the provocateur thing. But I have to discount it based on Cantwell's publicly displayed (on The Colbert Report) complete lack of safe firearms handling skills. That stuff gets so ground into you in the military that it's hard to even fake messing it up.
Another possibility is that he's a graduate student in gender studies at City University of New York, working undercover to collect data for his doctoral thesis (and possible Salon book of the month contender): "Gullible is Written on the Ceiling: How to Build a Cult Following of White Cisgender Male Libertarians and Get Them to Believe Anything."
That second one would explain a lot.
For example, it would make sense of his recent decision to purge non-believers (including little ol' me) from commenting on his site. It's hard to keep a cult following together and cheering each other on. You can't get that ol' Joe Stalin "everyone's afraid to be the first one to stop clapping" effect going if there's anyone around spouting sense right into the middle of Dear Leader's nonsense.
It would also explain his occasional descent into the self-pitying (and revealing) "I became a crack-smoking car thief because my mom was a Catholic and my dad was an abusive alcoholic government employee -- nothing bad I've ever done was my fault!" routine that makes -- to cite Cantwell's own current SEO punching bag -- Brad Spangler look like the very model of mental health and moral rectitude by comparison. After all, inside every Social Justice Warrior (even a secret one working on his doctoral thesis) there's an excuse for the insanity trying to get out, right?
And of course it would explain his ongoing fascination with "celebritarianism" -- a word I've heard floating around lately, usually as snark. "Celebritarian" seems to be a portmanteau of "celebrity" and "libertarian," two words that just don't seem to go together very well (also, I'm not sure if current users realize that Marilyn Manson got to it first). Cantwell seems to take celebritarianism very seriously, right down to pursuing an SEO strategy (I did a little meta tag research on his site; he's got some interesting tricks going, but they don't seem to be panning out too well). Most roads to Salon book of the month run through first establishing a certain degree of prior fame, or at least notoriety. So it fits.
But nah. I'm thinking that "well, what do you expect, he's an asshole?" is the most likely explanation.
Posted by Thomas L. Knapp at 12:57 PM