... in which Trek bicycles will play an important role this year.

The best-known instance, of course, is Mary Burke's campaign for governor of Wisconsin. She's the daughter of Trek's founder and the company's former head of European operations.

The second, you'll see cruising up and down Archer Road outside of Gainesville, Florida tomorrow: 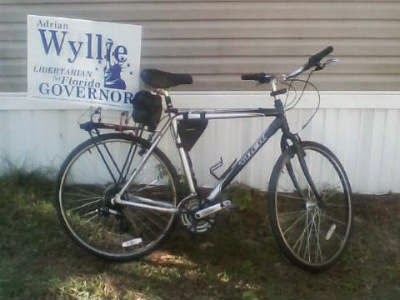 Archer Road is a major thoroughfare with high traffic, especially during commute times. There's also at least one polling place along it between the city limits and the turnoff to my place. And there's a very nice bike trail a few feet off the road, where I can fly the Libertarian Party colors very visibly to traffic, hopefully without worrying about getting run down like a dog by some guy in a pickup truck with a "Swamp Life" sticker and pictures of his stick figure family on the rear window.
Posted by Thomas L. Knapp at 4:59 PM