[Update: Many hours later, I've worked back and forth with the FastPencil support team and the book has proceeded from "your purchase of e-pub/print publishing and a hard copy of the book are stuck in the shopping cart, even though your purchase went through" to "pending." But it's been in "pending" since late last night. Since I was kind of planning on a big Friday-Sunday rollout, I'm a little peeved. But it's still coming, folks ... - KN@PPSTER]

... hopefully any minute now. I'm awaiting resolution of some (hopefully minor) issues with the ebook/print on demand company I'm using. The book is finished, the book is formatted, etc. And I've paid the "put it in our store" fees and for one print copy to be shipped to me. Anyway ... 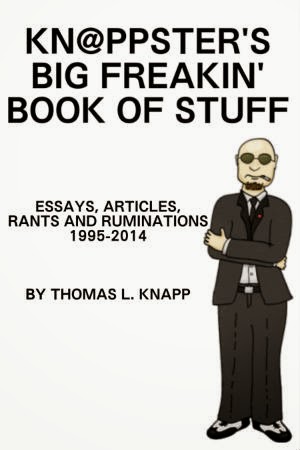 Yes, there will be a free download available -- not sure what formats yet. Since I'm placing it in the public domain, anyone who wants to break it out into other formats than what I offer will be free to do so (and I'll be happy to link free downloads).

Just to get things rolling, here's the introduction (after the jump).


So, why a book?
Perhaps the more pertinent question is why a book now?
I noticed awhile back that my online writing career had reached its 20th anniversary.
I've also noticed over time that I seem to have picked up a fan club. Not a huge fan club, but a following of some sort. I see myself quoted by people I don't know in places where I don't hang out (but Google hangs out in those places and tells me all about it). Some of those fans aren't really fans, they're friends. And that's even better.
Finally, I started "working on the Internet" part-time in the mid-1990s and started "working on the Internet full-time in 2000. My mom and dad, to whom this book is dedicated, don't do the Internet. Before 2000, they occasionally saw my stuff in dead-tree format in the local paper, and they knew that I was doing "real work" (building boats, building houses, milling mustard). Sometimes I get the feeling that they worry about me these last 14 years. Do I beg on the streets or what? So I'm planning to send them a thick dead-tree doorstop version of this book so that they can know I've been up to something putatively "productive."
Call it vanity, but it occurs to me that there might be a market for a collection of stuff I've written over the last two decades. Probably not in a large-scale financial sense, of course. I don't anticipate making the New York Times best-seller list, I'll be placing the whole mess in the public domain, and electronic copies will be freely available in at least some formats. But a market in that I suspect some people will value the collection enough to offer it (and therefore me) their time and attention in return for it.
I consider that a good trade both personally (I write in the hope that people will read) and financially (to the extent that throwing this collection out into the world might "build my brand").
The hardest work in putting together this collection was avoiding various temptations.
The first and most obvious temptation was to hide my own personal evolution by only picking material that reflects my current thinking. I rejected that approach as dishonest. I am who I am today because I was who I was before. If I'm alive two decades from now I'll almost certainly be someone else who finds the me of today at least as embarrassing as I sometimes find the me of 1995.  I hope that's true. Not all change is necessarily progress, but no change certainly isn't. So I picked some stuff I may not agree with nearly as much now as when I wrote it. And by the way, all of the stuff in this book is published "as is" except for typo corrections, standardizing of dashes and capitalizations and basic concessions to conversion from web to book format. I haven't changed a word.
The second temptation was to try becoming the system-builder I've never been. I've got nothing against writers whose bodies of work constitute  (hopefully) coherent and consistent systems of philosophical or political thought (think Ayn Rand at the right end of the libertarian spectrum and Kevin Carson at that spectrum's left end). In fact I love their work and love them for that work. But I'm not a system-builder, I'm a polemicist. My opinions, and my reasons for those opinions, have definitely changed over time ... and not necessarily in a linear fashion that plausibly implies an unchanging underlying philosophy. So I didn't try to pick material that all tends to fit into a particular philosophical box fashioned after the fact. Sorry for any cognitive dissonance.
So anyway, here's what I've come up with:
So anyway, that's why a book, why a book now, and what's in the book. Enjoy.
Tom Knapp
November 2014