The Testament of James: A Post-Pre-Review Review 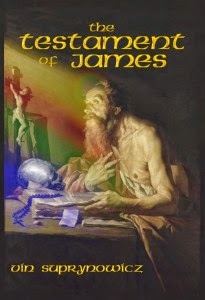 No need to reprise what I wrote a couple of days ago when I can just link to it -- before reading this review of The Testament of James by Vin Suprynowicz, please take a look at my pre-review (if you haven't already). Having now finished the novel, I don't see anything in the pre-review that I'd care to retract.

Now and then I see reviewers refer to a novel as a "romp." I don't know that I've ever done so before, but I'll do so now. I'm thinking of "romp" in terms of a fairly short story (The Testament of James weighs in at less than 200 pages, excluding explanatory notes) and a 1913 Webster's definition: "Rude, boisterous play or frolic; rough sport."

Among my favorite "romps" one might find, as exemplars, several of L. Neil Smith's North American Confederacy novels and F. Paul Wilson's "Repairman Jack" series up to the point where Jack's story really begins merging into the overall sunset scenario that eventuates in Nightworld.

I offer these two examples in particular because The Testament of James seems to be of a piece with them on another front. That is, it seems to be part of (not necessarily chronologically the beginning of) a series. The dust jacket implies (and Carl Bussjaeger seems to confirm in comments on the pre-review, per Cat Farmer) that there's another installment on the way. I'm looking forward to it.

We've got all the elements of a good series here. A home base from which storylines can naturally develop (Books on Benefit, a Massachustetts-based rare/antique book store), sympathetic protagonist duo with an ongoing love interest, a well-rounded supporting cast that I strongly suspect consists of thinly disguised real people that Vin really knows (and that you and I may know as well), plenty of cats that we all know, etc.

As to the subject matter of this particular story, well, your mileage may vary. I think it's the bee's knees. If you're looking for a good story, it's hard not to find one in the question "so, this Jesus guy ... what was that really all about?" Wars have been fought over that question. The overly curious or contentious have burned at the stake over it. How could it not be interesting?

Suprynowicz is far from the first writer to mine the ol' "lost document from antiquity that casts doubt on the story of Jesus as told by the powers that be" vein of story gold, but in my opinion he's done a better job of it than most in three key respects:

First, the historical background he gives to it makes a lot of sense. It may or may not be what actually happened (I suspect that much of it is what actually happened), but either way it's something you can believe without too much work unless you're really attached immovably to some other narrative.

Secondly, the story he tells (the novel's story, not just the historical background story ... but that too!) works as a story.

Thirdly, he doesn't drag it out just to drag it out. The story covers a short period of time (a couple of days) and is told in 200 pages because that's what it takes to get it told well. The pacing is perfect and the reader (this reader, anyway) is left both satisfied with the story as it is and wanting more of the characters and of the world it happens in (exactly the outcome a series writer wants!).

Any novelist who can get all three of those things right, in the same book, is providing honest value to the reader. Suprynowicz does it. Read this book.
Posted by Thomas L. Knapp at 6:32 AM