The Next Thing I'm Planning to Spend Time Messing with ...

is this (graphic links to Amazon, but it's not an affiliate commission link or anything): 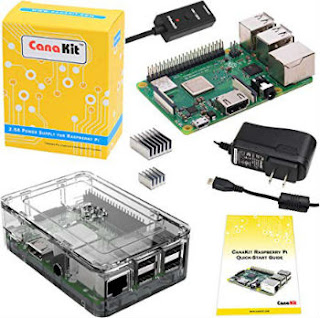 I have a running deal with my younger son. Periodically he'll want something he finds on eBay, but he respects (or at least fears) their Terms of Service too much to set up an account there before he turns 18.

So, I buy or bid on (and pay for) the stuff, and once he owes me enough money to buy me something I want on Amazon, he does that and we settle up.

The thing above is a Raspberry Pi 3B+, with useful accessories (case, heat sinks, power supply) bundled into a kit.

I may just install Raspbian (a Raspberry Pi version of Debian Linux) on it and see if it works well as a substitute for my ChromeOS desktop machine. I'm doubting that it will (it only comes with 1Gb of RAM), but you never know.

Or I might stack Retropie on top of Raspbian. Retropie emulates a bunch of old computers and game consoles. I could re-live my teen "writing games in Commodore BASIC" years (albeit on a faux-64 instead of my beloved VIC-20), or play all the old consoles/games I couldn't afford back when they were new.

Most likely outcome: I get it put together and running, quickly decide I'm bored, and the kid who owed it to me gets the run of it.

But it should be a bit of fun however things turn out.
Posted by Thomas L. Knapp at 12:17 PM