I can't really blame it. We used the hell out of that thing, to the tune of usually at least 4 or 5 cups a day. It started brewing half cups a few days ago. I de-scaled it, cleaned the needle, etc., per instructions. That didn't seem to help. The instructions also noted the reservoir could be cleaned by putting water in it and shaking it. After I did that, it stopped working entirely. Probably a thermostat or sensor  stopped working right and then the shaking tore something else loose.

But like I said, we used the hell out of it, and we're not going back to brewing a full pot. We don't normally use pre-bought "k-cups," but rather little "k-cup"-shaped filter baskets that we just put coffee in before brewing. That way, instead of me brewing a full pot, drinking aging coffee all day, probably brewing a second post, etc., we just make a cup when one of us wants a cup. Less coffee wasted, and it's fresh, and I get the kind/strength of coffee I want while Tamara gets the kind/strength of coffee she wants.

The serendipitous coincidence: I happened to get about $80 worth of Bitcoin Cash earlier today. And what do you know, there's an actual Keurig at Amazon for about $80 (not an affiliate link). Has a 52-ounce reservoir so we don't have to add water each time we brew a cup. And comes with a "variety pack" of coffee too. So I headed over to Purse (yes, an affiliate link). Should be here by the end of the week. I'll use the French press until then. 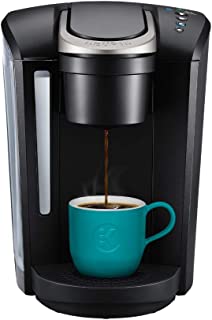