Went Ahead and Felt the Johnson (Scofflaw Goodness Included)

I really was considering writing in Darryl W. Perry (for whom votes unfortunately wouldn't be counted in Florida) or Zoltan Istvan (who has a cool name and some cool ideas, but who isn't a libertarian) right up to the minute I walked into the voting booth. But I decided sticking with my party was the most reasonable thing to do. Yeah, I'm a hack that way a lot of the time.

Of course I voted for Paul Stanton for Senate.

There weren't any other Libertarian candidates on my ballot, and I don't vote Republican (and especially not for Keith Perry, who must have killed at least 50 trees to put all that crap in my mailbox) or in favor of retention of judges. So I did vote for some Democrats. 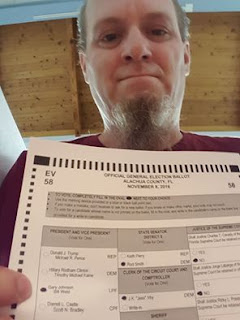 Why not just leave those races blank? Because I am phobic. In theory, I could have left them blank and the votes I did cast would be counted. But I'm always afraid that it would instead be treated as a spoiled ballot, especially in a recount situation. So I go lesser evil and vote my whole ballot.

I also wanted to get some civil disobedience in. "Ballot selfies" are illegal in Florida and the state has actually been warning on TV, etc. against taking them. But they are clearly constitutionally protected speech, as federal courts have already recognized in several states by way of suppressing ballot selfie bans.

If anyone wants a test case here in Florida, well, here you go.

I took this photo in my voting booth at the Tower Road branch of the Alachua County library system at 10:07am this morning.

I've posted it to Facebook and I've tweeted it at Florida Attorney General Pam Bondi; I guess not pursuing it would make her an accessory after the fact, wouldn't it?

Authoritahs: Just let me know I'm being charged and I'll come in and surrender myself. But let me warn you in advance that doing that will be both expensive and painful, and that it will produce the opposite of your intended outcome.
Posted by Thomas L. Knapp at 11:52 AM