If you follow KN@PPSTER, you know I do razor reviews now and then and you know I'm a big fan of Dollar Shave Club (yes, that's an affiliate link -- if you join DSC through it, I pick up $5 in credit).

I've had my eye on doing a review of Harry's for some time (NOT an affiliate link, haven't signed up for anything like that yet -- but if you use the promo code STAPLETON at checkout, you can get their "Truman set" for $5 less than advertised cost, and Jason Stapleton will get a cut; figured I'd help a fellow libertarian podcaster out). I became more intent on doing such a review a few months ago when my brother recommended Harry's. And I recently noticed that they have a "just pay $3 shipping" trial. So, here's what the trial package looks like: 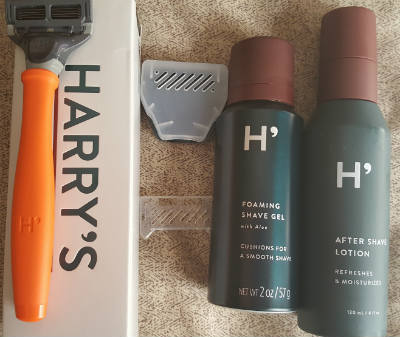 The trial set comes with a razor handle (from their "Truman" set -- they also sell a slightly more expensive "Winston" set), one blade, two different kinds of blade cover, and bottles of the company's foaming shave gel and after shave lotion.

I'm going to discuss product/performance before I discuss pricing, shipping frequency, etc. After all, the first concern is whether or not you get a decent shave, right?

Handle: Dollar Shave Club wins this one hands down, at least with me. The Harry's Handle is heavier, longer, and a little simpler than the DSC handle (the Harry's blade just snaps on and off instead of having to push a button to pop the old one off; that MIGHT give Harry's a durability advantage, but after only a few days I don't know). Personally I found the weighting of the DSC handle more comfortable. The DSC handle also has more and better "make it easy to keep a grip on" stuff going on. You do get to choose your handle color with Harry's ("Total Orange," "Nautilus Blue," or "Olive 107"). DSC just sends you a white razor handle. Hey, I can live with the lack of color options. I just like DSC's handle better.

Blade: Harry's would seem to have an up-front advantage, at least if you buy into the idea that more blades are better. The Harry's blade is a 5-blade affair, while Dollar Shave Club's 4x is exactly what it sounds like, a four-blade razor (the "Humble Twin" has two blades, the "Executive" six). The Harry's blade also has a built in "trimmer," a single blade on the top of the blade cartridge. You can get at those difficult areas under the nose, trim sideburns, etc. by turning the razor backward and using that top blade. Note that I said Harry's "seems" to have the advantage, because there's also the

Shave: I shaved with both blades for several days -- one side of my face with each blade, alternating blades/sides daily. I used the same shaving product on both sides of the face each day (Harry's foaming shave gel one day,  boar-hair-brush-applied Col. Conk World Famous Glycerine Shave Soap another, and some dollar store, also brush-applied, stuff, "Wit and Wisdom Shaved Cedar" once). The Conk glycerine product is my usual shave soap of choice because I like tradition and ritual, although I sometimes follow Jeffrey Tucker's suggestion of just using baby oil or even nothing beyond warm water.

On the first day, I felt that the Dollar Shave Club blade was superior. The Harry's blade seemed to tug just a little, I felt a tiny touch of razor burn on the Harry's blade side, and when I asked Tamara which side felt smoother without telling her which was which, she thought the Dollar Shave Club side won by a hair (pun intended). But those things COULD be due to my beard being "trained" to the DSC product, because on subsequent days, frankly, I couldn't really tell a difference. No shaving cuts from either blade during the comparison period.

I have to call the shave quality a wash. Harry's has five blades and DSC only four, but that fifth blade didn't result in any WOW! factor. The "trimmer" blade is cool, I guess, but nothing to jump up and down about.

So that brings it back to the handle. As mentioned above I find the Dollar Shave Club handle more comfortable (even after several days of comparison; I don't think it's just an "old habits die hard" thing). The handle/blade/shave experience resolves to a win for Dollar Shave Club. Not a big, dramatic, no doubt about it win, but a win.

I've never bought the Shave Butter product, but I did receive a sample pack that was good for a couple of face shaves and one head shave (I'm not shaving my head right now, so no razor comparison on that). I'm considering buying some, because it is just the nicest stuff I've ever put on my face before shaving. The Harry's product does rank well against all three of the others, though. It squirts in your hand like a shaving gel, but lathers up in a pretty big way like a shaving cream.

The Harry's after shave lotion is quite nice, too -- as the name indicates, it is a creamy lotion, not an alcohol-based "after-shave cologne." Personally, I prefer Fuller Brush's witch hazel lotion, and need to find someone to order a new jar from the first one lasted years). My second preference is one of those alcohol-based products, e.g. Aqua Velva. I guess I like "bracing" better than I like "soothing."

Although I think Dollar Shave Club's "shave butter" is probably the best "soap" of the four I mention, I don't like it so much that I'm willing to pay $6 a pop for the full size ration of it. That's just me. I'm not going to award a "victory" to either company on the basis of their non-blade/handle products.

For the Dollar Shave Club 4x plan, I pay $6 per shipment and have three choices: One shipment a month, one shipment every other month, or "on vacation" (stop sending me stuff until I say otherwise). Each shipment includes four blade cartridges. I go with the every other month option, so my cost breaks down to $3 a month. A blade lasts me two weeks or a little more (at the moment I am several blades ahead of my shipments; when I'm shaving my head -- I'm not at the moment -- I seem to need more blades just about the time they arrive). The blade costs breaks down to $1.50 a blade. That's a lot cheaper than the store brands of similar blade count, but of course more expensive than plain old double edge single "safety razor" blades (which I have used; my problem with them has been that the handles seem to either wear out and break pretty quickly, or to be poorly designed vis a vis blade positioning/adjustment such that it's hard to get a good shave and not cut myself to ribbons).

Harry's promotes three different product plans on their signup page (blades only, eight blades per shipment, $15; blades plus two bottles of foaming shave gel, $27; or blades, two bottles of shave gel and 1 tube of a daily face wash product, $34). There are other plans/products and you can customize. They offer three different pre-fab automatic shipping plans based on how often you shave: Every two months, Every three months, or every five months). You can increase or decrease the frequency, up to a minimum of every six months. I don't see a "vacation" option, but you can cancel your plan and just order stuff when you need it (my brother liked Harry's for that reason; he didn't like the Dollar Shave Club autoship-only premise). The cost per blade, depending on the size of your order, runs between $1.75 and $2.00 per blade -- a little more than DSC, but not "break the bank" more.

Frankly I prefer the Dollar Shave Club setup. The blades are cheaper, I can pause and restart easily if I need to, and the choice between monthly and bi-monthly shipments is enough flexibility for me. When it comes to their other products, I get an email before each shipment to let me know it's time to add anything I'd like to the box before they send it.

I hit Wal-Mart's site and looked for a major brand razor blade refill package comparable to these two companies' offerings. The first one I came across was Gillette's "Fusion" product. That's a five-blade cartridge with the little top-of-cartridge "trimmer blade" like Harry's offers. Cost per blade when bought in a four-pack: $3.86. If you use two blades a month, you're paying about four bucks per month more than with Dollar Shave Club or Harry's, and you either have to go to the store to pick it up or manually order it instead of it arriving automagically about the time you should be needing it.

SO: I would say that if you shave at all frequently and feel like you need a multi-blade setup you should consider one of these two options. The quality is great and the price beats the stuff in stores all to hell.

Of course, I want you to choose Dollar Shave Club because when you do I make a little money. But it won't break my heart if you go to Harry's and use promo code STAPLETON instead. If you do that, maybe you'll also let Jason know I sent your business his way and generate some reciprocal good will :)
Posted by Thomas L. Knapp at 11:48 AM