Now That I'm Back, a Brief Travel Reminiscence

That probably doesn't seem like a LOT of mileage to most of you, but keep in mind that I went for three years without straying further than 50 miles from Gainesville, and hand't flown in 13 years. So it was a big trip for me.

My biggest fear was that I would arrive at JAX airport and find out I was on the no-fly list, requiring me to either cancel the trip or go Greyhound. No problems. Because I didn't want or have time for problems, I didn't opt out of the scanners or any of that stuff. Maybe sometime when I'm feeling my oats. My second biggest fear was that the variable air pressure would give me toothaches, since my bottom teeth remain a mess. No problem there either. A little bit of congestion over the course of the week, probably from cutting across a bunch of territories with different pollens and temperature profiles, but that was about it.

At the far end of the trip (addendum: after an overnight with my brother Mike and his exceptionally lovely wife Pam, including a tour of old downtown Milwaukee), I got to spend several days visiting with my brothers and my parents. My mom and dad were in the process of moving from their house of 20 years or so in Marshfield, Missouri into an apartment in Springfield. We arrived in time to help with the auction of household goods and some cleanup, but mostly just got a good long visit in.

I brought home some cool family pictures and artifacts, which I've been sharing and discussing on Facebook. For example, my great-grandfather John T. Knapp's razor strop, which was a childhood object of disciplinary terror for me: 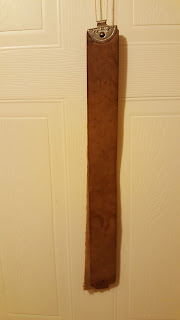 It was a great time. I got almost no WORK -- by which I mean blogging, podcasting, etc. -- done, for which I apologize. Too much to do and not really very good hotel Internet. This coming week's travel to the 2016 Libertarian National Convention in Orlando should be just the opposite. I appreciate y'all's continuing support in these expensive endeavors, which is why I'll be re-pinning the "help me out with travel" post to the top of the page momentarily.