"You shouldn't have given Phillip that money"

He had a couple of lines before that, but it wasn't until that one (spoken during a crossfade with the actor unseen) that I realized it's Patrick Fischler playing Paul Larkin in Atlas Shrugged: Part I.

Fischler's been in TV and movies for more than 20 years now, and he's good in a way that I guess is bad for actors who aspire to be headliners: He is the character, so much so that if you notice he's the actor, it comes some time into the role, with an "isn't that the guy who  played ..." [Jimmy Barrett on Mad Men, Phil on Lost] double-take.

Presumably the studios like their lead actors to be of the more instantly recognizable variety, so that the actor, in addition to the plot, is an audience draw. NTTAWWT, and there are definitely exceptions. But I'm thinking that it sucks for Fischler and keeps him off the short list for lead roles in big box office productions precisely because he's so damn good. 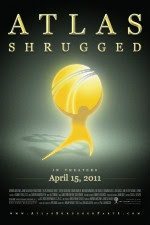 Yeah, I waited for the DVD to watch Atlas Shrugged. Missed it on the big screen for various reasons. And after mixed reviews at best -- even from people I'd have expected to love it no matter what -- I was a little spooked. I didn't want to not like this movie.

I shouldn't have worried. It's a fine movie. Not perfect -- no film of a novel as much loved and hated as this one could be, if for no other reason than that we all bring our mental images of the characters to it, and all those images are different, and no production is going to come close to matching all of them -- but well-made, with good choices on how to streamline the complex narrative to film.

Personally, I think the casting was a real strength. It's a mix of "respected working actor, but not someone whose presence is going to overshadow the story" (Fischler, Jon Polito, Michael Lerner, Armin Shimerman, Graham Beckel, Matthew Marsden, Michael O'Keefe ) and "talented relative newcomer" (Taylor Schilling, Edi Gathegi).

Those casting decisions may have been involuntary -- e.g. Brad Pitt and Angelina Jolie dropping their interest -- but they work. The story is well-crafted enough to carry itself. Throwing major "star power" into one or two roles in a tale with multiple extremely strong characters would have just unbalanced things. It had to be either an all-star cast or a no-star cast. The budget wasn't there for the former, and the filmmakers did a helluva job with the latter.

The film was not a hit at the box office. It only made back a quarter of its budget. But I predict that it will perform strongly over time on DVD (and other retail formats), especially if the other two parts get made and made with equal skill, and that the third part will make good on the budgets of all three films in box office receipts alone. In that respect, it's less like the novel it's based on and more like Ayn Rand's previous work, The Fountainhead, which took several years to become a best-seller.
Posted by Thomas L. Knapp at 1:40 PM