Why Can't It Be Both?

I've still never managed to finish writing a novel myself, but I love coming up with plot elements for them. Here's one that kind of came together in my brain today. Feel free to use it (this blog is Creative Commons licensed -- see the sidebar -- so mi plot es su plot, but I'd greatly appreciate an acknowledgment, or even having a character named after me).

Inspiration one: A BBC story about a planned Russian probe of Phobos, thrown into today's RRND mix by Steve Trinward.

Inspiration two: A comment on said story from Rocky Frisco about old speculations that Phobos is artificial.

Inspiration three: The Wikipedia article on Phobos, which alludes to those speculations and dismisses them, but does allow as to how the moon is at least partially hollow. 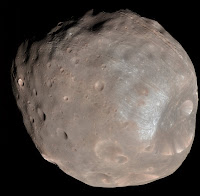 So, the plot: Earth explorers eventually reach Phobos and discover that it is both natural and artificial. That is, it is an asteroid that was towed into Mars orbit at some point in the distant past and partially outfitted as a spaceship. Tunnels, living quarters and other cavities were drilled or blasted, including one just under the Stickney crater which was obviously intended as the compartment of a large engine for pushing Phobos through space.

Yes, I realize that so far there's at least some superficial similarity to Greg Bear's Eon, and probably other works as well. Hell, someone may have invented this exact plot before.

Who built it? Were (are) there Martians or was (is) Mars orbit just a convenient ship construction yard for aliens from elsewhere?

Why wasn't it finished? Was there some sort of problem with it, or perhaps some Mars-surface cataclysm that killed off life there before it could be completed, perhaps in anticipation escaping said cataclysm? Or hey, what if it was actually a working craft before it got there, and was abandoned and stripped (or not stripped?!?) in Mars orbit?

Anyway, run with it if it strikes you as the basis for a good story.
Posted by Thomas L. Knapp at 7:01 PM