Like I said, I do not live in a tent ... but I sleep in one a lot. The hard ground seems to be better for my back, elevating my feet is supposed to help with both that and diabetic neuropathy, and I just plain enjoy it. I've slept outside all but a few nights for the last couple of months now.

But, it's getting colder -- below freezing tonight, according to the forecast, with possible snow next week. Soooo ...

Today I moved the tent to a gentler slope. The previous placement wasn't comfortable, as I tended to slide downhill while sleeping. The new placement has a gentler slope, and a more or less body-width plateau across the the back of the tent, so that I can sleep level when I want to.

The new position is also better sheltered from north winds by a wooden fence and a neighboring house, closer to my own door so I don't have to schlep through as many feet of bad weather 'twixt house and tent, and has the door facing south instead of north now. 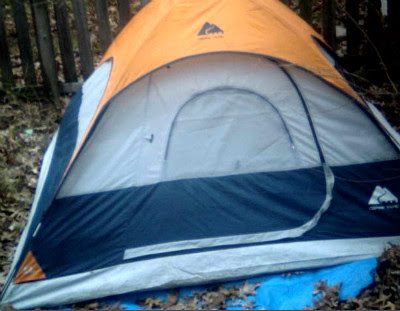 While I was at it, I cut up an old tarp to create an extra layer of ground cloth. The rest of the tarp is available, if need be, to set up as a lean-to on the north side for even more wind breakage.

I used most of a can of water-proofing spray on the tent a couple of weeks ago, and even though there's been a good bit of rain I've had very little in the way of moisture problems since (I may do some seam-taping for good measure). The new arrangement should be even better -- the base of the tent on the uphill side is flush against a wooden fence footer that should deflect any water flow along the ground, and I also realized the rain fly was not symmetric and that I had it on backward; fixing that reduced rain exposure through a "window" screen.

My sleeping rig is a conventional temperate weather bag -- I'm looking for a good deal on a "mummy" style bag rated for zero fahrenheit and below -- atop a foam rubber mat and a horse blanket, and topped off with a World War II wool GI blanket, one more blanket and an old (not goose-down, unfortunately) quilt. Oh, and a couple of comfy pillows. I figure I'm good down into the teens if necessary.

I've got a battery-powered LED "lantern" and a flashlight (for more focused reading light) hanging from one of the gear loft cords. In the gear loft and on an old milk crate (I'm looking for a small waterproof storage box, or better yet an old military foot locker as a replacement) I keep another flashlight, an electronic cigarette, an alarm clock and some books. I've got a rag rug inside the doorway, and plan to buy a rubber doormat for outside next time I'm out at the cheap stores.

If I can find the right "mummy" bag (or even if not, probably), I think I'm set for my first all-winter sleeping-out attempt. Not "living" outside. I still spend days and evenings in the house. I'm not a hermit, and I'm not really interested in the problems involved with outdoor toilet and shower facilities and such. Been there, done that, for extended periods of time (Saudi Arabia, among other places). I've also camped out for one or two nights at a time in temperatures as low as 20 degrees below zero fahrenheit, but I haven't done so for extended periods, so this will be a new experience.

[Brief Update, 11/29/11: OK, I've slept this arrangement two nights now, in temperatures down to 32 fahrenheit and through periods of steady, sometimes heavy, rain. "Snug as a bug in a rug" -- dry, warm and comfortable. I still want a mummy bag and possibly some cheap "emergency blankets" to hang as extra tent insulation for the next stage of reduced temperatures, but in general I'm very happy with the setup.]