Some of their best friends are gay

What does a president get from a gay audience when he's publicly against gay marriage, unwilling to take bold action to repeal "don't ask, don't tell," and so terrified of the political consequences of challenging the Defense of Marriage Act that he'll actually defend it in court? Why, he gets "thunderous applause," of course — if he's a Democrat.

And his veep? Six figures for the DNC war chest, baby.

Question for my LGBTQ friends who keep voting for Democratic candidates and writing checks to the Democratic Party and waiting/hoping for the payoff: How's that working out for you? 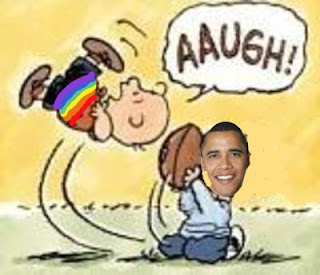 There's a better way of going at this.
Posted by Thomas L. Knapp at 4:08 AM