Mitt Romney says publicly he's not considering another presidential campaign, most recently on Sunday during an appearance on NBC's "Meet the Press." But many of his loyalists expect one and remain at the ready for 2012. 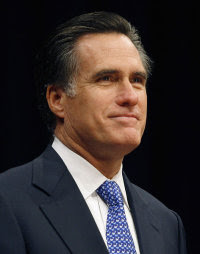 Ain't never gonna happen, and I can explain why in one word: RomneyCare.

Between now and 2012, one of two things will happen. Either President Barack Obama will manage to ram through his own health care plan, or he'll fail in the attempt. Either way, Romney's screwed as a potential GOP standard-bearer.

If ObamaCare passes, Romney will lack the credibility to persuasively critique it -- he was the architect of its state-level prototype, after all -- nor will those who supported his idea need him to implement it.

If ObamaCare fails, even with a Democratic majority in both houses of Congress, then Romney is still hoist with his own petard. If that Democratic majority won't give ObamaCare to Obama, it's even less likely to give RomneyCare to Romney. And even as feckless and stump-silly as Republican congresscritters are, I can't imagine them signing off on it either, not even for a Republican president. Nor can I imagine GOP primary voters rallying to Romney: If he promotes RomneyCare, they'll reject him. If he renounces RomneyCare, they won't believe him.

So, it all comes down to a simple question: Will health care still be a big issue by the time the 2012 presidential campaign heats up? Unless !Teh 911! Evildoers! take center stage again in a big way, you can bet it will be.