Comes around, goes around 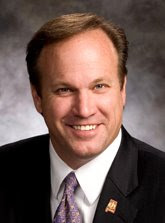 Bill Johnson is running for governor of Alabama.

I haven't seen Bill since, oh, 1996 or so. Back then, he was executive director of the Missouri Libertarian Party and had served as the LP's 1994 US Senate candidate in that state. I'm pretty sure he still holds the Missouri LP's percentage vote record for a statewide race -- 4.7% or so [inline update: Per Richard Winger, Bill's actually in second place -- the record holder is Janet Lewis, who received 6.2% of the vote for State Treasurer in 1992]. He was also one of the two individuals most responsible for recruiting me into the LP (the other was L. Neil Smith).

These days, he's transformed himself into a "compassionate conservative" (read: Big-government Republican) who, until he resigned today to pursue his gubernatorial run, ran ADECA, the Alabama state agency in charge of graft distribution ("community development" and "faith-based initiatives" and so forth -- oh, and this year, $18.7 million for "drug task force personnel"). He apparently minimizes his Libertarian past and writes off inconvenient parts of the LP's platform (marijuana, prostitution) as things he disagreed with but had to put up with since he was running on our ticket.

Back when, though, his subsequent denials notwithstanding ... well, let's put it this way: He personally played a big role in radicalizing me.
Posted by Thomas L. Knapp at 7:27 PM