They range from the inevitable (he's alive, just like his ex-father-in-law, Elvis) to the not entirely implausible (assisted suicide) to the truly bizarre (Mahmoud Ahmadinejad had him killed to draw the world's attention away from the streets of Tehran).

What? You think I'm trying to puff up my blog traffic with sensationalism? You're damn tootin'. This thing is going to be a circus whether I score hits off it or not. Might as well throw in, as long as I try to add some value (analytic value, entertainment value, whatever).

Jackson held assets of variable value, such as a back catalog of records and recordable songs which might sell faster or slower depending on how high his public profile was at any given moment. He also had huge debts (the numbers I've seen are in the $400 million range), and three kids whose futures he probably wanted to provide for.

He was 50 years old, with past injuries (broken leg, broken vertebrae) and about to kick off a physically intensive "comeback" concert series.

25 years ago, there was nobody who could move like Michael Jackson, and that amazing bodily fluidity was just as big an element of his public persona as the voice or the songwriting talent. At 50, after a decades-long hard ride on his own body, could Michael Jackson himself move like that?

Maybe not. Maybe his body was telling him, in the rehearsals, that this was just not going to happen -- that he was more likely to break down injured after a couple of shows and leave the crowds disappointed than to pull off a triumphant return.

If his post-death financial affairs are competently handled, there's every chance that sales of albums, story rights and such over the next few months will be big enough to wipe out his debts and leave his heirs an unencumbered estate. People have killed themselves for similar reasons before.

Furthermore, his death leaves that "comeback" a gleaming, never to be realized potential ("he was back on top of his game when he went out") instead of a distinctly possible failure ("after two shows, Jackson was hospitalized for exhaustion; his body had given out under the strain of attempting to dance like his 25-year-old self"). Once again, it wouldn't be the first time someone committed suicide for "legacy preservation" purposes.

He's alive! It was all a fake!

See above -- especially those debts and the possibility of a failed comeback. Add to that the now decades-long history of sexual abuse allegations that hung over his head, constantly threatening to come back at him in the form of extortion, ruinous lawsuits or even criminal charges.

Maybe he socked a few million away in hidden places, secretly had a retirement villa built in the jungles of Paraguay, and then just got off the bus.

This one strikes me as much less likely than suicide due to the sheer technical demands of pulling it off ... but hey, he wouldn't be the first person to fake his own death in an effort to escape creditors and enemies.

X had him murdered!

On the other hand, there may have been parties who stood to make more -- or lose less -- money from his death than from his continued life, even counting the costs and risks involved in having him taken out of the picture. Enough said.

Personally, I think Jackson's death is probably exactly what it looks like: An aging star with a dysfunctional childhood and family life, an apparently sad and lonely personal -- and increasingly physically painful -- existence, and a permanent cloud of suspicion over his head, finally hitting the full chamber in an ongoing game of Russian roulette with the prescription drugs he used to numb the physical and mental pain.

I was never exactly a fan, but there's no disputing that Michael had enormous talent -- singing talent, songwriting talent, dancing talent and the ability to put that all together. In that last area alone, pretty much every choreographed pop dance routine since 1982 is shot through with his influence.

Yes, that talent made him rich and famous, but he paid a huge price for it from the very beginning -- first as a crassly exploited child star, then as an object of ridicule for his personal physical problems and alterations, and finally as an accused predator and effectively a recluse. His life was transparently a sad thing in many ways, and his death is sad also.

That doesn't mean that it isn't all fair game for weird, exploitive theories, and if someone's going to drag in the clicks with said theories, it might as well be me. So, on to the "entertainment value added" stuff, the stuff even more bizarre than "Ahmadinejad had him assassinated."

Some time in the early 1980s, the Greys finally decided it was time to start revealing themselves to us Earthlings. Knowing that we'd find their physical appearance strange and disturbing, they decided to first spend a few decades acclimating us to that appearance, using a well-known human as an "interface" who would alter his own physical appearance to match theirs. 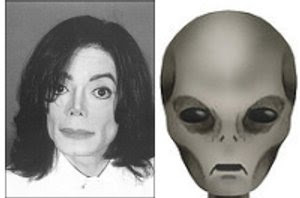 Those who wish to detect (read: create) hints at this most secret of all secret missions will find them, among other places, in the video for Scream.

He's not dead. He's just finally been allowed to collect his reward -- an all-expenses paid cruise on the Mother Ship.

He's faked his own death -- and a completely different life -- before! Think about it ... have you ever seen them together? 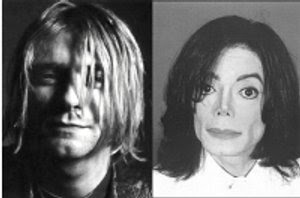 Into what container is the legendary entertainer moving his talents now? I have my suspicions.

Too cool not to include, if for no other reason than that it gives me an excuse to point a hat tip link at the Fred whom I suspect to be the Fred who pointed it out:

The Michael Jackson photo is a public domain mug shot from his 2003 arrest.

The Grey is a public domain drawing by Wikipedia user LeCire.

The Kurt Cobain head shot is by Elena M., published at Diccionari Per Aociosos under a Creative Commons Attribution-Share Alike 2.5 license.
Posted by Thomas L. Knapp at 8:30 AM