Completely unsolicited, folks -- I have no financial interest in Big Head Press, although I certainly would if I had money and they were seeking investors. I just like their stuff (and now that I've ditched dialup, I can read the online versions without a single page load encompassing breakfast and lunch). 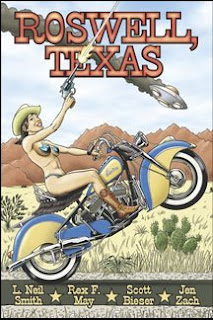 Roswell, Texas -- UFO crash in Roswell? Check. But everything else is, well ... a little different than you may remember. Texas never became a US state, Roswell's in Texas, and that's just the beginning (two, count'em, two Popes, and one of'em goes heeled, ferinstance; and Disneyland ain't what it used to be either). Nobody does alternate history skiffy like L. Neil Smith, and nobody turns it into a graphic novel like Rex F. May ("Baloo"), Scott Bieser and Jen Zach.

The Probability Broach: The Graphic Novel -- L. Neil Smith and Scott Bieser collaborated on this conversion of Smith's classic novel into graphic novel. This is one of those rare situations in which it's impossible to decide which version is better. I love'em both (although I especially admire the pogo-stick sequence in the graphic novel for personal ego reasons). One extra word in the Declaration of Independence! A successful Whiskey Rebellion! Great apes (as opposed to mere mischevious monkeys) in Congress! Good stuff.

A Drug War Carol -- I'm kicking myself for forgetting to mention this one before Christmas. The best piece of anti-drug-war literature you can put in anyone's hands, period. Written by Susan W. Wells and illustrated by Scott Bieser, ADWC lays out the history of (and the case against) prohibition in style ... and with rigorous, fully sourced arguments. Great story, great graphics, supremely effective agitprop.

Lots more at Big Head Press ... but these are the titles I've already read and heartily recommend.