When I Feel Like I'm Getting Low on Musical Instruments, I Often Go Rogue

Disclaimer: I'm not being compensated in any way for this post by Rogue or any other musical instrument maker or seller, nor are the links "affiliate" links. Just my opinion, because I feel like it.

So, my daughter Astel has indicated an interest in taking up guitar. Since I only have one acoustic dreadnought, one acoustic/electric dreadnought, one cigar box guitar complete and one stalled in-build, one 3/4 size dreadnought configured as a three-string with drop-in pickup, two electrics, and one electric lap steel at the moment (I gave away one of my old acoustic dreadnoughts to a friend who seemed to need it, and tore up my $10 Strat clone for parts), a ukulele, and an ancestral mandolin that's not playable (it hangs on the wall) ...

I decided to buy this: 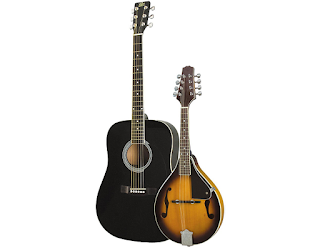 The guitar is the same model black Rogue RA-90 as the one I gave away. And after a coupon code, it came with the mandolin for $90.

A benefactor bought me the same mandolin, in black rather than sunburst, years ago (at least six, but I think more like nine). I messed with it a little bit but never got serious, and passed it off to someone who was interested when I was shedding stuff for the move to Florida. But I've been listening to a lot of bluegrass and blue-grassish stuff lately and that bug is biting again.

I'll pass off my other Rogue RA-90 -- an acoustic-electric that I bought open-box -- to Astel and replace it with the new one as my "when I sit up and bed and feel like practicing my blues scales -- Alexa, open Backing Buddy" axe. I don't have an amp in the bedroom anyway.

So anyway ... this will be my fifth and sixth Rogue instrument (my third dreadnought and my second mandolin -- the lap steel is also Rogue), and I've never found much to complain about. I think the lap steel was the most expensive at about $80, and I've always found that I get much more than I pay for with Rogue. I had to raise the action on the previous RA-90 acoustic to get rid of some string buzz, and I always put new strings on either immediately or fairly quickly. but that's just part of setting up and breaking in a new guitar. Other than that, the instruments produce good sound quality, the intonation isn't off (that would be a nut-to-bridge distance problem with fret placement), and they're not delicately built.

There are cheaper guitars out there. My reading of reviews says they're worth even less than they cost, tending to arrive with bowing necks, separating fretboards, etc. Rogue produces an inexpensive instrument, but in my opinion and experience a quality one that's better than one has any right to expect for the price.

Note: I've come across a number of claims concerning who makes Rogue instruments -- that they're made by Fender, by Squier (which is owned by Fender), or as an in-house brand of Musician's Friend. Since I can't find an official Rogue site, or any Rogue references on the Fender or Squier sites, I assume the last is the correct answer (especially considering that's where I've always bought them).
Posted by Thomas L. Knapp at 12:25 PM