This is Dead Man's Hand:

I wanted to go primitive in building a "diddley bow." For example, none of those new-fangled metal geared tuning machines. I ordered four wooden friction pegs on eBay (and broke two of them before I got the hole in the "headstock" just large enough for a tight but turnable fit): 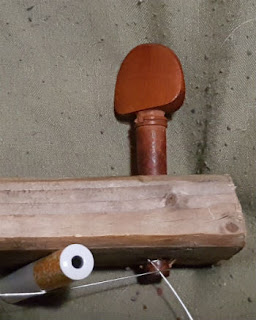 One good excuse for going "primitive" is that the only power tools I own are an electric drill and an electric stapler. I didn't use the latter at all. I used the former to drill the tiny hole for the string at the tail, to drill a tiny pilot hole in the headstock, after which I used an awl to enlarge it in tapered fashion for the peg, drill the sound holes, etc.

Other than that, the instrument is:


I'm sure I'll get back to homemade instruments in the near future, and maybe come up with something better (I've got an old cake pan and ideas for making it into a bass guitar). For the moment, my musical energies are going into practicing the D major pentatonic scale on the mandolin.
Posted by Thomas L. Knapp at 7:26 PM