Usually it's little "e-packets" from China containing guitar picks, hats, etc., that I bought on Wish or eBay, or those annoying after-party notices trying to make you think they're your domain registrar. Stuff like that.

But occasionally it's something different ... 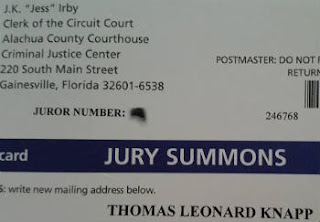 I've only reported for jury duty once (in Missouri), and they got all the jurors they needed before they even got to the point sticking me in a group to be considered. I got summoned two or three times in a period of six months back in 1991 -- while I was out of the country for Desert Storm.
Posted by Thomas L. Knapp at 9:14 AM