So, the Presta to Schrader adapters I was waiting on arrived Thursday. Got the tires aired up as much as I could with my tiny hand pump (65 psi or so) -- they're rated for max 90 psi and I plan to get them to and keep them at 80-85 -- and took off down the Archer Braid trail to the nearest gas station with one of those super-frap air stations that just lets you set the pressure you want and go to town. A pleasant three-mile ride.

When I got to that gas station, I discovered that the air pump didn't like my tires very well even with the Schrader adapters on them, and that it tops out at 70 psi anyway. OK, so every bike has something about it that proves to be the bane of my existence. On this one, it's those Presta valve tires. And I assume the hole in the rim will be too small to accept a Schrader. So I ordered a decent "stand it up on the floor and hold it with your foot" pump with built in gauge so I can keep air in the damn things. Should be here today. End of digression.

I wanted to put in more than six miles (three each way) on the bike's virgin ride so I took off down a street I know that has some reasonable elevation changes. There aren't really any hills here in north central Florida that I've seen but I wanted to see how well the bike was geared for handling a fairly long (1/4 to 1/2 mile) but not especially steep grade. Answer: It's perfectly geared for that. As out of shape as I am, I averaged better than 10 miles per hour over that that 12-mile ride and the next day's 20-mile ride and handled all the grades without having to stop and shamefacedly walk my bike.

One thing that worried me was the tire size. These are racing tires, only 25 millimeters wide and fairly slick. I was afraid I'd lay the bike down trying to come around curves and corners. But no, it handled beautifully. The bike rides like a Cadillac.

Reader Chris Moore has the same model (only with a coaster/pedal brake -- I use regular hand brakes) and mentions that the tubes are cheap and will need quick replacement. I suspect the same thing of the tires. They look visibly worn after less than 40 miles of riding. So I'm planning to buy two new tires and two new tubes some time in the next few weeks (unless a supporter visits my Amazon Wish List and buys them for me -- the list is full of bike stuff right now, but the tires/tubes are the only thing I'd rate as absolutely necessary ASAP).

Once I was sure I liked the bike, I started hanging all my crap on it -- water bottle, tire pump, brackets to hold my phone and a flashlight (for a headlight) on the handlebars, a little LED taillight on the seat post, transplanted the rear rack from the Trek, etc.: 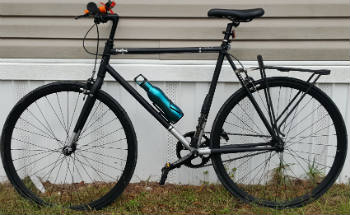 If there's decent weather for it, and if I have good tires/tubes on the bike by then, I want to do my first "century ride" (100 miles) in late February -- from home near Gainesville to Cedar Key and back, with a short detour to pick up the six extra miles to get me to 100. IIRC my longest ride so far, ever, has been 40-odd miles, but I think I can work up to a century ride in a month or so. My near-term speed goal is to start clocking in at an average 15 miles per hour instead of 11-ish. On a 100-mile ride, that's a difference of three hours or more.

Now if that damn pump will hurry up and get here, I'm going to get out for another cruise. I don't feel really comfortable with a bike until it has a hundred miles or more on it.

Update: Pump arrived, aired the tires to 80 PSI, took off ... and had my first flat at about seven miles (thankfully not that far from home, though -- a mile or so). It took air, got home, it was losing again. Can't find a puncture. Probably cheap/bad tube, so I guess I'm off to the store.
Posted by Thomas L. Knapp at 12:15 PM