Better than a boycott 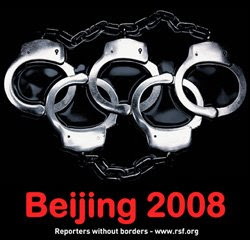 I sympathize with calls for a boycott of the 2008 summer Olympics in Beijing -- but it seems like the least effective way to highlight Communist China's oppression both inside and outside its borders. I think I have a better idea.

Instead of declining to watch the Olympics, or threatening not to buy goods and services from the sponsors of Olympic TV coverage, etc., why not use the games to showcase the causes that the Communist Party would rather people didn't hear about?

As the Sydney Morning Herald puts it, those sponsors "fear a backlash," and that's all well and good, but how about a positive incentive instead of a negative one?

Instead of writing to (for example) Coca-Cola and threatening to switch to Pepsi, why not write to them and ask them nicely to donate their purchased commercial time to feature The International Campaign for Tibet, or Falun Gong, or Dream for Darfur, or Human Rights Watch, or Reporters Without Borders, or Amnesty International? They could still stick their corporate logos on the ads, but they'd be making the sale with a positive contribution worthy of reward, rather than by supporting the thuggery of Beijing.

Boycotts make sense sometimes, but in this case it seems to me that what's called for is the one thing the Communists can't stand: An open airing of the issues, right in their faces.

Email ThisBlogThis!Share to TwitterShare to FacebookShare to Pinterest
Labels: Olympics