I hate that ride. Hate it. And love it.

The rolling terrain makes it feel like it's uphill both ways -- every long, slight, uphill grade is draining if you're rolling under human power, and the long, slight downhill grades aren't steep enough to build much momentum for the next upswing. The net change in elevation each way is about 20 feet, but I the cumulative change is several hundred. Ten feet down over a mile, 15 feet up over the next half mile, then 20 feet down ... tiring. One time I got a flat tire AND heat exhaustion on the ride back, which isn't a great memory. And until this ride, every ride has also involved hostile dogs chasing the bike.

It's pretty country (I'm planning, or at least hoping, to live out there eventually). It's a sin to not visit Bo Diddley's grave periodically, and this year I got to do so on Tom Petty's birthday. And whenever I get up that way, I also get one of the better burgers in this part of Florida at Shakers Drive-Thru. 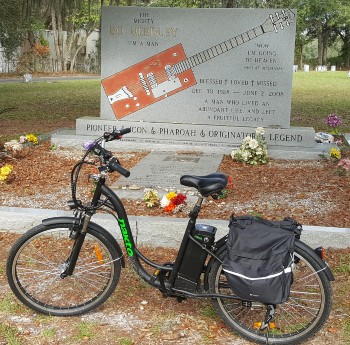 The "how did the new bike do" part:

I think the new bike did quite well.

No flat tires or mechanical malfunctions on the way there or back. The derailleur does need some adjusting (it likes to slip around when being shifted into low gear), and I should probably spend a few minutes measuring and getting a more perfect seat to pedal distance, but those things don't go to the bike's quality.

I did't try to track how much human-powered pedaling versus assisted pedaling versus no-pedal-just-throttle I did. My guess is that I covered 1/3 to 1/2 the distance (probably toward the higher end of that) under purely human power, and all but maybe a quarter mile of the rest using pedal assist. I kept pedal assist going for almost all of the last five miles or so, with some throttle at the very end, to see if the battery was going to give up the ghost. It still had power when I reached the house.

A thirty-mile ride, even one that was only fully-human-powered for half the distance, was probably more than I should have bitten off so quickly. My knees are hammered, so it will be a few days before I ride again and I'm going to take it easy for a while before the next test of the bike's range and performance. But now that I know 30 miles is doable on one battery charge even in my shape, at my weight, etc., I'm hopeful that 50 miles is also within reasonable reach.