When last I broached the subject, it was to troll Wal-Mart a little: I had dropped the $80 bike off for repair, it took them six days just to let me know they couldn't fix it, I had gone in for a refund and used that refund to order a second instance of the same bike, and was informed that it would take two weeks to get here. Personally, I thought they should expedite the shipping a little.

They did. The bike arrived five days ahead of schedule, on Halloween. Huzzah!

Of course, then there was the matter of assembly. They'll assemble bikes for customers at the store, but if it's ordered online you have to wait until it arrives to ask for assembly. So Tamara stopped that evening after work to "pick it up" and ask them to assemble it. She was told that because the holiday season is starting it might take up to ...

Wow. I started to feel a little hot under the color.

They called the next morning -- 12 hours later, maybe 14 hours later -- to say it was ready. Huzzah again!

So that night I rode it home, several days earlier than anticipated. Thanks! Wal-Mart. 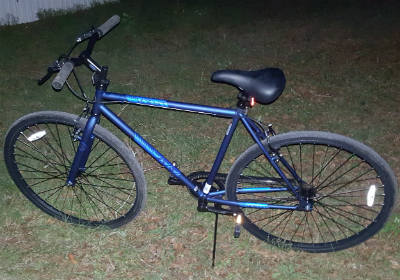 I've only had time to put 10 miles on it, but I keep thinking I hear the same squeak/grind that preceded the big problem with the last bike (the bolt holding on the left crank arm loosens and when re-tightened won't stay tight).

But you know, that may just be paranoia talking. Maybe this time the $80 bike will turn out to be one helluva deal.

If not, I have two possible courses of action in mind:

If I follow course #2, I expect I'll be getting more than $80 worth of value out of the thing. I'll have two spare tires, two spare wheels, a set of brakes, etc. I might move the $80 bike's handlebars over as well.

My goal is to fairly quickly get back to riding more than 10 miles a day, probably the 10.5 mile round trip down the Archer Braid trail from my house to the trail's terminus at Archer and back each morning.
Posted by Thomas L. Knapp at 8:34 PM