@KentBicyles: Perhaps a Bit of Public Shaming is in Order

Both have failed at less than 100 miles of fairly gentle riding (road and paved bike path -- I don't even ride my bikes across my yard, I walk them in from the road -- and not hell for leather, just be-bopping along at commute or light cardio workout speed).

The failure in both cases was the same: The bolt holding the left crank arm loosens up. I don't know if this is due to a materials defect or to poor assembly, but I suspect the former -- on the first bike, the bolt would not remain tight when I re-tightened it.

From reading reviews, I see that this is a frequent problem with Kent bicycles. I've seen it mentioned in various reviews of various Kent models as sold by various web sites. So it isn't just a problem with the particular model I bought. Which, granted, is basically the least expensive road bike Kent (or anyone else) offers. But just because it's inexpensive that doesn't mean that it's OK for every instance of the product -- and I'm now two for two -- to come with the same known defect.

This time, the bike broke down six miles from home (this was the first time I trusted the bike for a 20-mile round trip; big mistake) and I had to chain it up and leave it. I'll be going back later today. Maybe it will still be there, maybe it won't, or maybe it will be there minus parts, or whatever.

I haven't decided whether to return the bike to Wal-Mart for replacement with yet a third bike, or whether to just disassemble the bike and use it for parts.

I do know that I'm planning to do the opposite of recommending Kent bicycles to friends and family. So far, they don't seem reliable enough even for the "occasional recreation" category of use my teenagers would likely put them to. 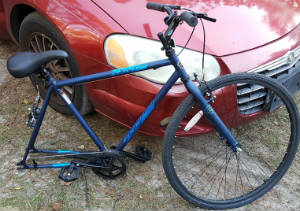 I wonder if I can still return it. Whoever stole the rear wheel wouldn't have had an opportunity to do so if the defect in the bike hadn't manifested too far from home for me to just walk it back to the house and too severely for me to safely ride it somewhere else.

For some reason I thought it would be reasonably safe, chained up five feet off one of Gainesville's main drags (Archer Road), in plain view and right next to an operating business. But now that I think about it, that may have been the least safe place to leave it. Whoever walked up and removed the rear tire was brazen about it. Anyone who noticed probably just assumed they were pulling off the rear tire to change a flat on their own bike.
Posted by Thomas L. Knapp at 1:19 PM