This whole thing kept threatening to go sideways and turn into yet another one of those "I can't believe I fell for the old 'order something online from Wal-Mart and everything goes wrong' routine again" posts ... but everything seems to have worked out.

So I saw the bike on sale for $79.xx, online only and couldn't resist, even though this is Wal-Mart and even though something seems to go wrong every time I order online from them. It looks like a lot of bike for $80 -- and since it would probably cost $100-$150 to do the things I'd need to do to get the Trek 7000 back in operating shape, that's a good deal. Hey, if nothing else I will end up with a new set of brakes (needed for the Trek) and a new set of tires (probably needed for the Trek), right?

Order placed. For once, the order actually seems to proceed apace instead getting stuck at the "processing" stage and ending with a refund instead of the arrival of what I ordered. Site-to-store, available for pickup on Wednesday.

First hitch: Wal-Mart advertises that when you buy an unassembled bike from them, you can have it assembled, free, at the store. So I call the store to find out about that. Yes, I can have it assembled. No, I can't just ask to have it assembled. I have to show up to claim it when it arrives and ask then. Kinda silly. But anyway, Tamara drops by when it arrives, asks for assembly, gives them my name for pickup (it was ordered on her Wal-Mart account), and is told no problem, it should be pretty quick, they'll call.

So I plan to ride into town with Tamara on Friday morning, have her drop me off on her way to work, pick up the bike, and ride it home before the heat of the day (daytime temperatures are running 90 degrees fahrenheit this week).

But on Friday morning, there's still been no "your bike is ready" phone call. About midday, I call the store to ask when the bike will be ready. Oh, the bike is ready, they just forgot to call. So I plan to get into town in the evening, pick it up and ride it home as things are cooling down but before it gets dark.

We arrive at the store. I do look briefly at bicycle lights, but there's a good hour of daylight left, I have some crap at home that will probably work as a stopgap, and I prefer to order little doodads like that from China for a buck or two a pop instead of paying ten times as much here. So I head for the pickup desk, which is unattended, but the people at the function next door say they'll get the guy. I wait.

The guy finally shows up, unlocks the storeroom and brings out a bicycle.

Here's the bike I ordered: 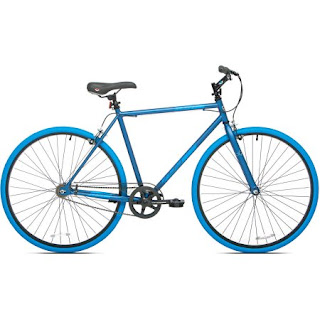 Here's the bike I got: 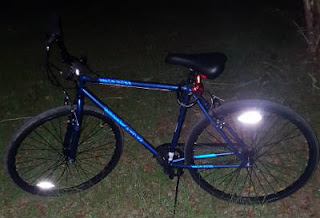 They're not the same bike. At least they don't look like the same bike to me. The advertised one is light blue with light blue tires. This is dark blue with black tires. On a lookover, my impression is that they're giving me a better bike than I paid for, and I say so. But the guy checks the order number, etc. and says no, that's the right bike. OK, fine.

Except that when he rolls it out and I feel the tires, there's very little air in them. Can I get those aired up, or is there a place to do so? They're aired up, the guy explains. Their machines have an auto-shutoff -- if the tires were aired up any more they would explode. Yes, he really says that. OK, fine.

So I finally get out of the store with the bike and instead of an hour of daylight remaining it is getting dark. I carefully (because I don't want to ruin tires and wheels) ride the bike two blocks to a Dollar Tree, where I do luck out -- a buck apiece for 1) a strap-on rear light actually intended for bikes; and 2) a clip-on-your-hat light that should do in a pinch (fortunately I had resisted the temptation to remove the plastic bill from my bike helmet).

Then I gingerly ride the bike another two blocks to the nearest gas station where I pay $1.50 for air (air is getting very expensive these days). Those tires that would explode if they were aired up any more? One is at 24psi, the other at 14psi. The tires are rated for 50psi.

Then I ride the 5 1/2 miles home in the dark. The hat-clip light isn't ideal, but everything works out, no unfortunate encounters with animals, automobiles, invisible potholes, etc. A very pleasant ride even though I haven't gone through the process of fitting the bike to my height, etc. yet. By the time I get home, I'm more convinced than ever that I somehow got handed a better bike than they charged me for.

So my near future exercise plan involves walking one day, biking the next instead of walking every day. Glad to be back on wheels.
Posted by Thomas L. Knapp at 7:16 AM