Different people draw the "forever" line in politics at different points. Personally, I put it at three months. More than three months out, any predictions are mostly just speculation. Nonetheless, I'm posting my first US Senate handicapping outlook 7 1/2 months out. Why? Because I was messing around with the maps and felt like it.

33 Senate seats are up for regular election this year, and another two will be disposed of in special elections. Here's the current partisan disposition of those seats -- red means Republican, blue means Democrat: 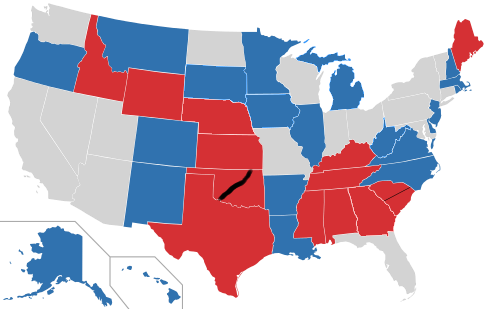 The states with black lines across them -- Oklahoma and South Carolinia -- are the states with two Senate elections, one normal and one special to select a replacement for someone who's retiring mid-term.

Here's my first cut at predicting outcomes in November: 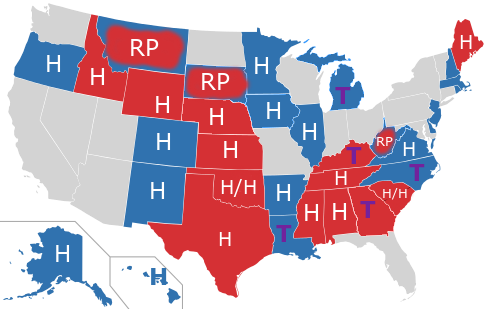 An "H" in the state means I'm predicting that the incumbent, or at least the current party, will hold the seat. For all those small blue states in the northeast, imagine a little "H" even though I didn't have room for one.

If I've put a red circle and the letters "RP" in an otherwise blue state, I'm predicting a Republican pickup there. If there were any red states with blue circles and "DP," those would be predicted Democrat pickups ... but at the moment, you won't see any of those.

As you've probably heard, the Republicans need to pick up a net six seats to garner a Senate majority.

My predictive methodology is pretty simple:

Taking into account that the incumbent re-election rate for the US Senate typically runs above 80%, I don't very seriously consider the possibility of an incumbent being booted out unless that incumbent is polling below 50% AND has a challenger within 5%.

I also try to account for two warring biases -- a fairly strong, but not iron, tendency toward party incumbency (i.e. open seats usually go to the party that held them before), and the fact that the party of the incumbent president tends to lose seats in midterm elections.

Given those two things (and actual polling data where I can find it), at the moment I predict that:

The three most likely states to move out of the "current party hold" category are Arkansas, Iowa and New Hampshire, in that order of likelihood.

In Arkansas, Democratic incumbent Mark Pryor is polling pretty softly against Republican challenger Tom Cotton. Pryor's not knocking down 50%. Some polls have him up by 10% ... while others have him within that 5% danger zone and a recent Harper poll has Pryor and Cotton tied at 39%. This may turn into a race to watch.

In Iowa, Democrat Tom Harkin is retiring, creating an open seat. At the moment it looks like a Dem hold with Democratic congressman Bruce Braley winning the seat, but his polling is softer than a "party incumbency" campaign wants to see.

In New Hampshire, Republicans seem determined to keep Democrat Jeanne Shaheen in office by nominating former Massachusetts Senator Scott Brown to run against her. Yes, you read that right -- he couldn't hold on to his seat in one state, so he moved to another state and for some reason the GOP is tripping all over itself to put him up against a pretty popular incumbent. But there's a slight chance that Brown will lose his primary or that Shaheen will get hit by a truck. I'm still keeping an eye on the Granite State.

Montana, South Dakota and West Virginia all look set to switch from Democrat to Republican this year. They're all effectively "open seats" -- South Dakota's Tim Johnson and West Virginia's Jay Rockefeller are retiring, while Montana's Max Baucus left the Senate in Februrary to serve as ambassador to China (his appointed temporary replacement, John Walsh, is the Democratic candidate for a full term).

All three of these states have been trending Republican for years. The only reason Democrats got elected in West Virginia from 1980 or so on was because Robert Byrd, the Senator of longest incumbency in US history, was so good at bringing home the pork.

The combination of open seats and midterm anti-president's-partyism are just overwhelming in these three states.

None as yet ... but a couple of those tossups are interesting.

Of the five "tossup" races, three don't look too good for the Democrats.

In Louisiana, Democratic incumbent Mary Landrieu is polling below 50% and often within margin of error of Republican challenger Bill Cassidy. I seriously considered marking the state a Republican pickup, but my gut tells me Landrieu will eke out a victory. So I'm splitting the difference between numbers and gut and marking it a tossup.

Michigan has an open seat due to Carl Levin's retirement. The polling there is just a muddle, and I confess I don't have a clue as to the outcome between Democratic congressman Gary Peters and former secretary of state Terri Lynn Land. My guess is that if the Republicans are in the fight here despite Levin's long-term incumbency, it's going to be close.

North Carolina has a Democratic incumbent, Kay Hagan, but she's only wrapping up her first term and Republicans seem energized to take the seat. She's below the 50% polling threshold and in dead heats with -- sometimes behind -- all the likely Republican challengers. This is another one that screamed to be marked "Republican pickup," but once again my gut said otherwise. I think the DNC will pump a lot of money into holding on to this seat.

The other two "tossups" are right in the Republican wheelhouse:

In Kentucky, Senate Minority Leader Mitch McConnell is in a nasty primary contest. He'll almost certainly win, but he'll get mud on himself doing so ... and the polls already have him neck and neck with Democratic challenger Alison Lundergan Grimes, always below 50%, always within 5 points, almost always within margin of error, and often LOSING. Incumbency and intra-party power count for a lot in Senate elections, so I'm not marking Kentucky a Dem pickup yet ... but it's not looking good for the GOP.

In Georgia, incumbent Republican Saxby Chambliss is retiring and he has no coattails. No Republican has pulled away from the primary pack yet, while Democrat Michelle Nunn, daughter of long-time Democratic Senator Sam Nunn, has her party's nomination all but nailed down and is polling well against all the Republican potentials.

King caucuses with the Democrats now, but might switch caucuses if the GOP grabs a majority and if they offer him enough party favors (plum committee assignments and so forth).

As mentioned above, West Virginia is coming out of the shadow of Robert Byrd. Conservative-leaning Democrats who would have been Republicans if not for Byrd's decades-long lock on the state -- Manchin among them -- are feeling free to consider a party switch now.

The Republicans seem to have three of the pickups they need for a majority in the bag. If they can hold on in the two "tossup" races where they're in danger, and win the three "tossup" races where the Democrats are in trouble, they've got their majority. They might also be able to swap in an upset in Arkansas, Iowa or New Hampshire for any of those "tossups." And if they're one or two seats short after Election Day and are willing to give King and/or Manchin some goodies, they might pull it off that way.

Right now I'd say rate it about a 55% chance that the next Senate will have a Republican majority of one, two or three seats.
Posted by Thomas L. Knapp at 5:17 PM