Coming Soon to a Web Site Near You 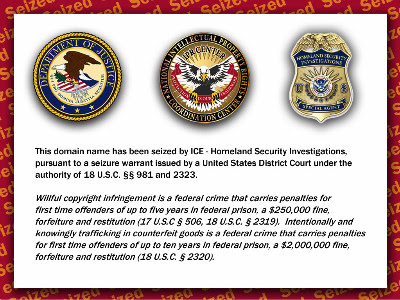 Passage of the latest Internet censorship bill (COICA -- "Combating Online Infringement and Counterfeits Act") is stalled for now in the US Senate, but since when has DHS ever worried about little niceties like, you know, having an actual law behind their activities?

As TorrentFreak reports, government "intellectual property" thugs are already stealing the domain names of sites that don't even actually host "infringing content" themselves:

When a site has no tracker, carries no torrents, lists no copyright works unless someone searches for them and responds just like Google, accusing it of infringement becomes somewhat of a minefield -- unless you're ICE Homeland Security Investigations that is.

DoJ/NIPRCC/DHS/ICE/Acronym of the Day is apparently just throwing this shit against the wall to see what sticks, finding out what it can get away with grabbing, COICA or no COICA, before it meets significant resistance.

How long before politically inconvenient domains get seized -- perhaps just temporarily at key times, handed back with an "our mistake, so sorry about that" as necessary? Can't happen here? Ever heard of Albert S. Burleson?