A modest proposal for a move to the left 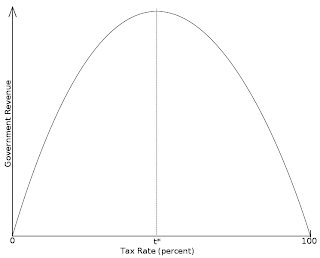 The "Laffer Curve" first came to public prominence back in the heyday of Reaganomics and "supply side" ideas. The concept is simple and, once you think about it, obvious (I say "once you think about it," because even though it's been around since the 14th century, it took Arthur Laffer to get people thinking about it).

What the Laffer Curve tells us is that the "optimal" tax rate t -- the rate which will produce the most revenue for government -- is less than 100%. There's a tipping point in tax rates beyond which people work less and produce less, creating less wealth to tax, than they otherwise would have. This is because they're not keeping as much of what they earn, making the earning of it less attractive. If the tax rate is x%, you get out of bed and go to work even if you have the flu; if the tax rate is x%+1, you take a sick day if you wake up with the sniffles, or maybe you pad your week of paid vacation out with a couple of unpaid days off on either side. The Laffer Curve treats that in the aggregate -- everyone's "tipping point" can be different, but there's still an overall tipping point at which increasing taxes would decrease, rather than increase, government revenues and vice versa.

One problem with the Laffer Curve as illustrated: 100% taxation would probably not produce zero government revenue. Even in the most complete state socialist system -- a system where every dime you earn goes to the government, which doles part of it back out to you in "benefits" -- some people would continue working right up to the minute the system was overthrown.

Anyway, here's the thing: Reaganites and other "conservative" politicians love the Laffer Curve because it allows them to promise tax cuts and maintenance of the welfare state. That's been the mantra since the 1980s: "We can cut taxes and still grow the federal budget -- our revenues will go up, not down, because we're on the right side of the Laffer Curve!" This is a great way to sell tax cuts (and the politicians who promise them) to those who are directly employed by government or who depend on a government check, a government contract, etc. for their livings.

Reducing the size, scope and power of government is a worthwhile end aside from the issue of how heavy the tax burden is. Increased government revenues are a bad thing, because most of what government gets up to is mischief of one sort or another.

More government revenue means more education bureaucrats sending more money to more "public" schools to teach our sons and daughters how to not read, not do math, not learn science and not know history.

More government revenue means more money coming out of your pockets and flowing into the bank accounts of the various privileged elites who lobby Congress for subsidies, protections and other favors.

So, when someone tells me that a tax cut will enhance government revenues, my reaction is "the tax cut you're proposing isn't big enough." There may even be a point at which a tax cut which keeps the rate to the right of the Laffer Curve's t is a bad idea because the evils the enhanced government revenue will pay for outweigh the evil of the marginally higher taxes themselves. I don't see that point as calculable, so it's not worth belaboring, but it seems theoretically likely.

Setting aside the possibility of abolishing taxation entirely (a worthy goal!), the least we can do is work to get taxation over to the left side of the Laffer Curve -- to the point where politicians who want to grow government have to try to sell the public on a tax increase to pay for that growth, instead of being able to have it both ways.

How do we know that we're to the left of t? Once again, there's that calculation problem -- this isn't a zero sum game, since tax cuts feed money back into the economy and strengthen it. The best we can do (as long as we insist on keeping government around, anyway) is cut taxes and then cut taxes, and then cut taxes some more, while keeping an eye on government revenues to see when they start going down (and then keeping an eye on them after that, too -- t will probably move downward as lower taxes improve the economy, making more people more prosperous and thus more able to say "screw it, I'm taking the day off -- government would just take x% of what I earned anyway").

My income tax cut proposal (in lieu of repeal of the tax until we can get that) is for a regular, annual increases to the personal exemption. Tying that into a project to get us onto the left side of the Laffer Curve would entail reviewing the results of the increased exemption each year. Did government revenues go up, or did they go down? If they went up, then the exemption needs to be increased even more. If they went down, hey, we're on the left side of t! We're actually cutting government, not just taxes! At that point, some will argue that it's time to stop cutting taxes. But (I say, with a cryptic politician's smile) let's cross that bridge when we come to it.

-----
"Laffer Curve" image from Wikimedia Commons, published by Vanessaezekowitz under the terms of the Gnu Free Documentation License.
Posted by Thomas L. Knapp at 4:46 PM