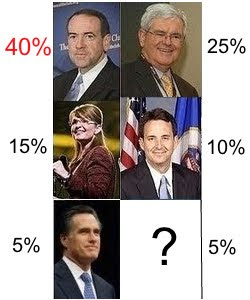 I'm at least temporarily narrowing the field, which affects the relative odds. It's not that the "also running or maybe running" category isn't interesting, it's just that those in it (Ron Paul, Bobby Jindal, Rick Santorum, Haley Barbour, etc.) aren't showing up on (my, at any rate) radar enough to have an impact.

The big GOP crisis of the moment is in New York's 23rd US House District, where Sarah Palin has endorsed Conservative Party candidate Doug Hoffman over GOP nominee Dede Scozzafava in a special election. Newt Gingrich is supporting "GOP unity" behind Scozzafava, while Mike Huckabee and Tim Pawlenty are playing their cards close to their chests. I've not seen anything specific to this race from Mitt Romney; as far as I can tell, he's out doing stump duty for GOP candidates in general, not flirting with the third party angle at all.

The Huckabee/Pawlenty hemming and hawing is natural.

As the GOP 2012 front-runner, Huckabee has the most to lose. His base is conservative, but it's not enough to carry the nomination. If he endorses Hoffman, he may cut himself off from possible inroads toward GOP "establishment" support. Endorsing Scozzafava is right out, of course, but if he can continue to straddle the fence without crushing his own nuts, that's what he'll do.

Pawlenty, on the other hand, has very little to lose ... and desperately wants to not lose it. His buzz is "centrist/moderate." If he endorses Hoffman he's still probably not going to pick up many conservative supporters, but he may drive away the supporters he has now.

Gingrich would probably have been better off keeping his yap shut. He's having a hard enough time getting back into the GOP conservative faction's good graces as it is, and coming out for Scozzafava didn't help him on that. My guess is he was paying off some owed favors to the establishment types, and hopes he can make it up with conservative (probably of the Reaganite) red meat later.

What's dangerous about Palin is that she has nothing at all to lose. She's way back in the field, but her base has proven that it ain't going anywhere, no matter what she does. They've convinced themselves that she's (insert whatever they wanted her to be here -- conservative, libertarian, whatever), and that's that. She's got nowhere to go but up. Or maybe she just has nowhere to go, period. Either way, throwing in with Hoffman doesn't hurt her and just might help her. She's continuing to double down on the "maverick" hand, hoping to draw to a straight flush.

Romney remains inscrutable. The feelers keep going out for a 2012 run, but he seems to be playing the waiting game, hoping for a train wreck to take some of the others out, or at least pull them down. Could NY-23 be that train wreck?

We're now less than three years away from the 2012 GOP nomination, but three years is forever in politics. My gut feeling continues to be that when it comes down to two, one of the two will be Huckabee. If Gingrich can figure out a way to stop stomping on his own testicles, he's got a shot at being the other. Otherwise, I'd say: Watch Romney.
Posted by Thomas L. Knapp at 3:29 PM