I am a Tech Laggard

I don't mean to be. Honest. It's just that I start using something and don't really think that much about whether or not it's state of the art until it stops working reliably.

Take, for example, my old D-Link D-601 router. I don't recall how long I've had it, but my guess is at least 5-7 years, and I see on Amazon that it's been around since 2004. So basically it's Bronze Age tech as such things go.

It's been pretty solid, and for a long time. In fact, I had a spare still in the box in case this one ever went bad (I recall finding the model on sale at Micro Center in St. Louis and buying two) ... and a few weeks ago I set it up for a neighbor after I found out that she had been paying Cox Cable $8.99 a month for years "for Wi-Fi," which meant for rent on a router built into her cable and phone modem.

Naturally, right after I gave away the spare router, mine seemed to start acting up more often, with the network just sort of arbitrarily going down for a few minutes, or running slow for a few hours (the wireless network -- the one machine connected by Ethernet cable seemed unaffected).

So, I have this on the way: 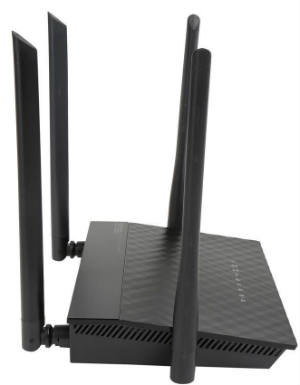 My current router runs at a blazing maximum of 150mbps. This one can hit 300 mbps in N/2.4GHz and up to 867 mbps in ac/5GHz ... and yes, I do have several dual band devices. So in addition to improved reliability (and, from the look of those four antennas, improved range), I'm expecting a lot less congestion when four or five computers, one or two gaming consoles, and a streaming media device or two are all trying to do things at once.

I think I saw a couple of routers that claimed even faster speeds, but they weren't on sale for $30.

It's supposed to arrive no later than Tuesday, and from the tracking info I expect it tomorrow.