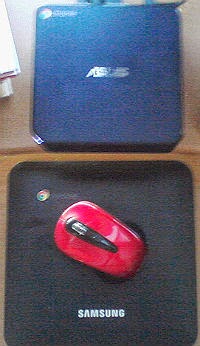 No, no, no ... I'm talking about the new Asus Chromebox. It's less than 5 inches square and less than 2 inches tall. Feast your eyes on a blurry photo of it next to the old Samsung model, which is a little bigger than my old Mac Mini square, though not quite as tall (for visual reference, that's a fairly standard size mouse sitting on top of the larger machine).


With the system simultaneously playing an HD video, displaying a presentation on Google Slides and running a science simulation on the University of Colorado's PhET site, it used just 11.2 watts. That's roughly one-tenth the level of a standard desktop system and less than the typical notebook.

Per the specs, it's less powerful than the Samsung (2 gigs of RAM instead of 4, slower CPU), but I haven't noticed any performance differential. Maybe I don't push my machines hard enough to reveal one. Only four USB ports instead of six, but it has a card reader built in. Nice little machine (I'm writing this post on it).

In a previous post, I blegged for worshipful readers to defray its cost (ballpark, $175 for the machine and the monitor adaptor I had to order to have it work with my old display -- which fortunately arrived by USPS about five minutes after the Chromebox arrived by UPS). Thanks to AJ who ponied up $20. Not gonna bang the drum on this TOO hard, but $155 to go ...