The three reasons why ... 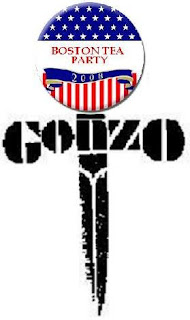 The first reason is the Boston Tea Party itself. It's my baby. I created it, and it just seems wrong not to tag along for whatever ride it may take me on. Vanity? OK, fine -- I'm relentlessly clawing my way to the top of the "exceedingly minor historical footnote" pile. I hear there's a free set of steak knives or something waiting up there.

The second reason is that, having consulted my various fiduciary duties, etc., I've found no real conflict. There's no possibility that the Boston Tea Party will be on the Missouri ballot this year, so I'm free to campaign for Congress as a loyal Libertarian (which will be my first priority in any case), and to support the LP presidential ticket, here. I'm not a member of the Libertarian National Committee, nor am I LP staff, etc. [1] And I don't plan to run against the LP ticket, even if I campaign in one or more of the few states where BTP ballot access looks possible. Anyone who'd consider voting for me (and the BTP ticket-topper, of course) would likely be from a small population which has already examined and rejected the LP ticket in any case.

I'd run against Obamacain, except that that sounds way too much like some weird club drug I'd like to try if I could find a trustworthy dealer. So instead of running against anything, I'll try running for something -- hey, how about freedom? I think maybe I've heard that somewhere before.

The third reason is the people who've asked or encouraged me to do so (intentionally or unintentionally, jokingly or seriously, on this ticket or any other). No, there aren't hundreds, or even dozens, of them. Just a handful, and if they want to be named they can name themselves. Here you go, folks. Remember the old saw about being careful what you wish for.

1. For those of you who are no doubt already clawing at your monitors and screaming "hypocrite!" at the top of your lungs ... stipulated. What else ya got?
Posted by Thomas L. Knapp at 6:00 PM