The new desk arrived today. The Amazon description said it was easily assembled in less than 30 minutes. It only took me 90.
I woke up this morning feeling apprehensive. I must have dreamt about this or something: 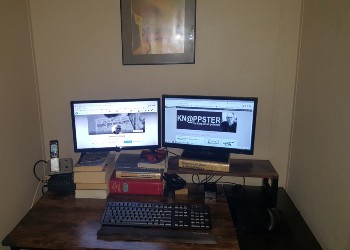 From top down, left to right:
Thane Eichenauer wanted a picture. So there's a picture.
It's not quite at the end stage (awaiting uninterruptible power supply before I get serious about cable management, thinking about mounting the router on the wall to the right of the desk instead of behind me to the left, etc.), but so far so good. Although I'm sure there will be an ergonomic shakedown involving some shoulder/neck tightness until I get used to the new setup.
Posted by Thomas L. Knapp at 7:53 PM