TV has given us the illusion that anarchy is people rioting in the streets, smashing car windows and looting every store in sight. But there's also the polite, quiet, far deadlier anarchy of the core citizenry -- the upright citizenry -- throwing in the towel and deciding it's just not worth it anymore.

If a big enough proportion of the populace -- not even a majority, just a largish chunk -- decides that it’s just not worth following the rules anymore, then that society's days are numbered: Not even a police-state with an armed Marine at every corner with Shoot-to-Kill orders can stop such middle-class anarchy.

Glittering prospect ... but I suspect that if it comes to that fork in the road, the political class will throw some of its members under the wheels for additional traction and take the other option, even if it only gets them a few more miles down the road in the driver's seat: 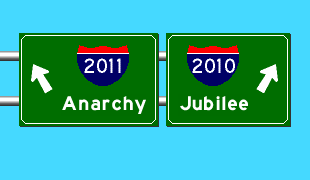 Nationally, 21.5% of mortgaged homes are "underwater," i.e. in negative equity -- the buyers owe more on the mortgage than they'd reasonably expect to get for the home if they sold it.

That's the average. Try 2/3 of homes in the Phoenix, Arizona area, nearly 3/4 in Las Vegas and, a friend tells me (I don't have a sourced stat for you on it), 46% in the state of Florida.

A lot of people are at the point of showing the banks their middle fingers and walking away, credit scores be damned. And now it looks like many of them may not have to:

The banksters got sloppy -- maybe even criminally dishonest -- with the paperwork. They're running into troubles with foreclosures as a result, and President Obama just vetoed a bill rammed through Congress for the purpose of slipping them a free pass.

It's about to get ugly. Scratch that -- it's already ugly and will almost certainly get a lot uglier. The question is how just how ugly it can get, and for whom. Two years into this game of catch-me-fuck-me with the banks, it's starting to look like sudden-death overtime with the banks on fourth down, long and fresh out of friends among the referees.

-----
Graphic is a screen capture from Kurumi's Signmaker
Posted by Thomas L. Knapp at 5:24 AM